Zuma under pressure as FBI probes US links to Gupta family 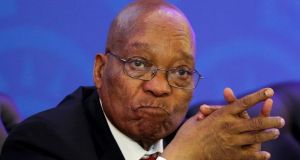 The FBI has opened an investigation into US links to South Africa’s Gupta family, escalating a political scandal over the three brothers’ alleged use of their friendship with President Jacob Zuma to control state business, according to people familiar with the matter.

US investigators have in recent months started investigating individuals, bank accounts and companies in the US for ties to alleged graft involving Ajay, Atul and Rajesh Gupta, these sources said.

The UK government has also asked financial enforcement agencies to investigate possible ties between HSBC and Standard Chartered and the Guptas over concerns about their exposure to potentially illicit funds. Chancellor Philip Hammond said in a letter to Peter Hain that he would pass on the former Labour cabinet minister’s concerns that the UK banks might have handled illicit funds linked to the family via Hong Kong and Dubai.

In his reply to Mr Hain, Mr Hammond said he had contacted the UK’s Financial Conduct Authority, the Serious Fraud Office and the National Crime Agency and that claims of corruption were taken “extremely seriously”.

The FCA said it was “already in contact with both banks named and will consider carefully further responses received.”

HSBC declined to comment. A person familiar with the bank said it was unclear if the Guptas had ever been among the clients of HSBC. Standard Chartered said it could not comment on the details of client transactions, but “confirm that after an internal investigation accounts were closed by us by early 2014”.

A person briefed on the matter said the accounts closed by Standard Chartered were likely to have been held by associates of the Guptas, rather than directly by the family.

News of the investigations will increase the pressure on Mr Zuma weeks before his ruling African National Congress is due to vote on his successor as party leader.

The US investigation is said to draw on information from emails that were leaked from a Gupta company server this year and led to media revelations about the family’s alleged dealings with government ministers and executives at state-owned companies.

The authenticity of the leaked material, involving thousands of emails and other files, has been denied by the Guptas but has ensnared international companies including Bell Pottinger, the British PR firm that collapsed last month over its role advising the family.

Too close to Guptas

McKinsey and KPMG have also been entangled in the scandal, apologising for mistakes made by their South African offices in being too close to the Guptas and their associates, while denying involvement in alleged bribery or corruption. Several partners have left both firms.

KPMG South Africa has said it missed red flags “regarding the integrity and ethics of the Guptas” when auditing Gupta-owned companies; while McKinsey has said that it should not have started to work alongside a company that was owned by a Gupta associate until completing due diligence on its ownership.

Corruption Watch, a South African nongovernmental organisation, has called for the US Department of Justice to investigate potential violations of the US Foreign Corrupt Practices Act by McKinsey. The firm has said that its own investigation found no evidence of bribery or corruption.

The US probe has focused in part on Ashish and Amol Gupta, who are nephews of the South African-based brothers and are US citizens, according to information in the email leaks reviewed by the Financial Times. The Guptas sought to employ their nephews in South Africa in 2013, the emails show.

Tax records in Texas name Ashish and Amol Gupta as directors of Brookfield Consultants Inc, a Houston-based company. Brookfield received payments to a US bank account from Accurate Investments, a United Arab Emirates company tied to the Gupta family, in 2014, according to documentation seen by the Financial Times.

Brookfield, Accurate Investments and Ashish and Amol Gupta could not be reached for comment.