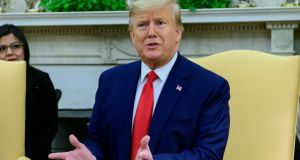 In a letter to House speaker Nancy Pelosi, US president Donald Trump said ‘more due process was afforded to those accused in the Salem Witch Trials’. Photograph: Ron Sachs/EPA

US president Donald Trump denounced the impeachment inquiry as an “illegal, partisan attempted coup,” in an extraordinary letter to House speaker Nancy Pelosi on the eve of an impeachment vote scheduled for Wednesday.

For only the third time in history, the 435-member House is expected to vote to impeach a sitting president, after the House judiciary committee last week charged Mr Trump with two articles of impeachment – abuse of power and obstruction of Congress – over his dealings with Ukraine. If the House votes in favour of impeachment, the process will move to the Senate where a trial is expected in January.

In a strongly-worded six page letter to Ms Pelosi on Tuesday, Mr Trump accused Democrats of an “unprecedented and unconstitutional abuse of power” in moving to impeach him.

“More due process was afforded to those accused in the Salem Witch Trials, ” he declared in the letter which was littered with his signature punctuation marks. “History will judge you harshly as you proceed with this impeachment charade. Your legacy will be that of turning the House of Representatives from a revered legislative body into a Star Chamber of partisan persecution.”

Ms Pelosi opened an impeachment probe in September after details surfaced of a phone call between Mr Trump and Ukrainian president Volodymyr Zelenskiy during which he asked his Ukrainian counterpart to do a “favour”. But Mr Trump in his letter to Ms Pelosi defended the phone call as legitimate. “You know that I had a totally innocent conversation with the president of Ukraine,” he wrote.

As Mr Trump defended his innocence in the letter and in comments to reporters in the White House, the House rules committee sat throughout Tuesday to set the terms and parameters of Wednesday’s vote. In a sometimes rancorous hearing that echoed the committee hearings of recent weeks, Republicans chastised their Democratic counterparts for holding the impeachment vote.

“Democrats in the House have been pushing to impeach Donald Trump before he was even sworn in,” said Republican Tom Cole as the hearing began, accusing Democrats of running “a partisan process that limited the president’s right to due process” and rushing to judge the president “whether the evidence is there or not.”

But the top Democrat on the committee, Jim McGovern, underlined the gravity of what was at stake.

“It’s up to us to decide whether the United States is still a nation where no one is above the law or whether America is allowed to become a land run by those who act more like kings or queens, as if the law doesn’t apply to them,” he said, describing Mr Trump as a president with a “penchant for cozying up to notorious dictators.”

Nonetheless, the committee was expected to clear the final legislative hurdle on Tuesday night, with a vote expected at some point on Wednesday.

As the House prepared for the first impeachment vote since 1998 when president Bill Clinton was impeached, in the Senate the top Republican and Democrat clashed over what the expected trial in the upper house might look like. Senate majority leader Mitch McConnell dismissed Senate minority leader Chuck Schumer’s request that certain witnesses, including White House chief of staff Mick Mulvaney and former national security advisor John Bolton, should testify.

“The Senate Democratic leader would apparently like our chamber to do the House Democrats’ work for them,” he said on the Senate floor. “We don’t create impeachments,” he said, instead arguing that it was the House of Representatives’ job. “It’s their duty to investigate, it’s their duty to meet the very high bar for undoing a national election.”

Referencing the Clinton impeachment 21 years ago, Mr McConnell said that at the time of the “1999 version”, Mr Schumer was opposed to having witnesses.