Speaking to law enforcement officials in the White House, US president Donald Trump said the police force would not be defunded or disbanded. Video: The White House 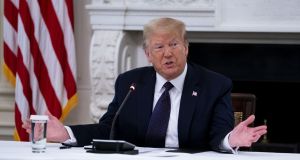 US president Donald Trump accused the Democratic Party of wanting to “defund and abandon” the police, as the issue of police reform moved centre-stage following the death of George Floyd in Minneapolis.

Speaking as he hosted law enforcement officials in the White House, Mr Trump said the police force would not be defunded or disbanded, after the catch-cry “defund the police” became a rallying call for activists, angry at police brutality.

On Sunday, Minneapolis city council pledged to disband the city’s police force, after nine members of the council said they supported the move, and would instead put a “public safety” system in place.

Other city leaders threatened to redirect funds from police organisations, including New York’s mayor Bill de Blasio, who promised to cut funds for the NYPD and redirect this money to social services.

Five months ahead of the presidential election, law and order threatens to become an election issue in the wake of Mr Floyd’s death.

While Mr Trump accused his Democratic rival Joe Biden of wanting to defund the police, a spokesman for the presumptive presidential nominee said the former vice-president “does not believe that police should be defunded”.

Similarly, Democrats in Congress led by Nancy Pelosi sought to distance themselves from the more radical suggestions to disband police services in a potentially ground-breaking piece of legislation unveiled by the party on Monday.

Though the proposal still needs to be approved by Congress, it contains several wide-ranging reforms including a ban on “choke holds” by police, a national database to track police misconduct and an end to the concept of “qualified immunity”, a legal protection that makes it difficult for people to sue officers for misconduct.

Before unveiling the reform package, congressional Democrats took a knee and observed an 8 minute 46 second silence in the US Capitol’s Emancipation Hall, a space named in honour of the slaves who helped build the Capitol.

Minneapolis’s promise to dismantle the city’s police force is not unprecedented in a country where local authorities have significant power over policing. Camden, a city in New Jersey which suffered from high crime rates, abolished its police service in 2013, replacing it with a countywide system.