Gibraltar voted overwhelmingly to stay in EU, but not at any price

London Letter: Gibraltarians fear Spain will use Brexit to grab coveted piece of the Rock 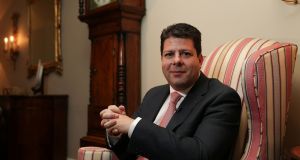 Gibraltar’s chief minister, Fabian Picardo: “Neither the people of the United Kingdom nor the people of Gibraltar are a prey that is on its knees, seeking any generous offer from the people of Spain.” Photograph: Daniel Leal-Olivas/AFP/Getty Images

Voters who opposed Brexit last year are often characterised as sore losers – Remoaners, in the sneering parlance of the Brexiteers. But in Gibraltar, where the Remain vote was more than 96 per cent, the Remoaners have moved on from the referendum with scarcely a backward glance at the European Union.

On Wednesday, chief minister Fabian Picardo told a Commons select committee at Westminster that Gibraltar’s Remain vote had less to do with any attachment to the EU than a fear Spain would capitalise on Brexit by pursuing its ambition of reclaiming the Rock.

Since the referendum, Spain has, indeed, offered to keep Gibraltar inside the EU if it allows Madrid to share sovereignty over it with London.

“We are not looking to remain as part of the European Union as being partly Spanish,” Picardo said. “The only way that somebody could describe that offer as generous would be to be entirely disingenuous.

“This is the generosity of the predator that thinks that its prey is finally prone and it’s going to take the price it’s been seeking to extract for the past 300 years,” he said. “Neither the people of the United Kingdom nor the people of Gibraltar are a prey that is on its knees, seeking any generous offer from the people of Spain.”

In a 2002 referendum, Gibraltar rejected joint sovereignty with Spain by 98 per cent to 2 per cent, the kind of margin seen in every vote on proposed changes to its status as a British overseas territory. The Rock, with a population of 30,000, has been part of the EU since Britain joined in 1972, but it has been allowed to opt out of some key policies, including the Common Agricultural Policy.

“We do not grow any food. There is just about space for some trees,” Picardo explained last month.

Gibraltar is also outside the customs union, so it is, as the chief minister told MPs at Westminster, already experiencing what a “hard Brexit” might feel like for people living near the border. He said the movement of goods between Spain and Gibraltar is relatively smooth, with standard delays of only “a couple of hours”.

Crossing the border is usually easy for people, except when the Spanish authorities choose to make it more difficult. During a period of diplomatic tension from 2013-2015, for instance, delays of three-five hours were typical. Even then, however, the border was much more porous than it was under Franco, when it was effectively closed.

“You can see pictures of the 1960s and 1970s,” Picardo told a House of Lords committee last month. “When a child was born in Gibraltar, people might take him down to the front and hold him up so that he might be seen by a grandparent across the way, who might never get to meet that child because it was impossible to get to Gibraltar in time. People passed away without their relatives being able to reach each other.”

Gibraltar officials have visited Northern Ireland’s Border areas in recent months to share their experience of being outside the customs union. Though Picardo insists such frontiers can run smoothly if there is good will on both sides, communities and businesses along the Irish Border will likely take little comfort from Gibraltar’s experience, or to welcome the prospect of delays.

For its part, Gibraltar is happy to remain outside the customs union, but it hopes to retain some element of free movement that would allow thousands of Spanish workers and foreign tourists to enter and leave without hindrance.

Gibraltarians are also seeking to keep free access to the single market for services, which is crucial for two of the Rock’s most important sectors: financial services and online gambling. But they are bracing themselves for a further Spanish onslaught once Brexit talks get under way.

They may be starting. This week, Esteban González Pons, Spain’s ruling Partido Popular spokesman in the European Parliament, made clear that Madrid would block any special treatment for Gibraltar.

“We believe that if they want to continue to benefit from the rights and advantages of being in the European Union, then the extremely generous co-sovereignty proposal is the best option,” he said.