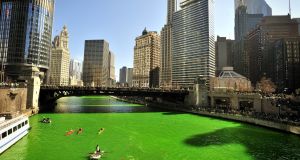 The St Patrick’s Day parade in Chicago has been cancelled due to the coronavirus outbreak. The organisers of the parade – one of the biggest in the US – announced the decision on Wednesday morning.

It had been scheduled to take place on Saturday. Taoiseach Leo Varadkar marched in the parade last year, as did UFC fighter Conor McGregor. It is not clear if a second parade, in the south side of the city, will go ahead as planned. It is expected that the city will still dye the river green, as in previous years.

News of the Chicago cancellation follows the decision by Boston’s mayor to cancel the city’s parade that was scheduled for Sunday.

Currently, the New York parade – the oldest in the US – is due to go ahead as planned next Tuesday. “We do not have a plan to cancel the parade at this point,” mayor of New York Bill de Blasio said on Tuesday, adding: “We’re going to watch that day to day, hour to hour.” On Tuesday, the governor of New York announced a “containment zone” around the city of New Rochelle, north of the Bronx, which has been particularly affected by the Covid-19 virus. The National Guard is being dispatched to the area to assist.

Several St Patrick’s Day events have been cancelled across the world due to the coronavirus. Irish Embassies from Washington to Vienna have cancelled annual receptions that are typically a central part of the diplomatic calendar. In the US capital, hundreds of people had been expected to attend a reception hosted by the Irish ambassador to the US after Thursday’s shamrock ceremony in the White House, but the event has been cancelled.

However, most of Taoiseach Leo Varadkar’s engagements during his trip to Washington to mark St Patrick’s Day are going ahead. He will meet with US vice-president Mike Pence on Thursday morning, though the event is not open to the media as in previous years. He will then hold a private meeting with US president Donald Trump in the Oval Office, before attending the Speaker’s Lunch on Capitol Hill and the annual shamrock presentation ceremony in the White House on Thursday afternoon.

The Taoiseach will meet the US president despite revelations that Mr Trump travelled on Air Force One on Monday with a member of Congress who is now in self-quarantine after interacting at a conservative conference less than two weeks ago with a person infected with the virus. At least four members of Congress are now self-quarantining after it emerged they had contact with the conference attendee. Both Mr Trump and Mr Pence also attended the event, which took place outside Washington.

But Mr Trump said on Tuesday that he had not been tested for the virus, stating that the White House physician said there was no need. “I don’t think it’s a big deal . . . I feel extremely good. I feel very good,” he said, after meeting with Republican members of Congress on Capitol Hill, though he indicated that he would be willing to be tested.