Lockerbie bombing conviction ‘may have been miscarriage of justice’ 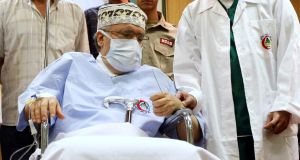 There may have been a miscarriage of justice in the trial of Abdel Basset al-Megrahi, the Libyan convicted of the 1988 Lockerbie bombing in which 270 people died, a review has concluded.

Megrahi, who died in 2012, was the only person convicted over the bombing of the Pan Am Boeing 747 aircraft that was flying from London to New York and blew up and crashed over Lockerbie, a small town in the Scottish borders in December 1988.

Megrahi’s widow and family had asked the Scottish Criminal Cases Review Commission to review his conviction for the murders of the 243 passengers and 16 crew on the flight and 11 Lockerbie residents on the ground.

The commission, an independent body that reviews alleged miscarriages of justices in Scotland, said on Wednesday that Megrahi’s case should be referred to Scotland’s high court for determination. It concluded that a miscarriage of justice may have occurred. The decision means his family is now entitled to begin a new posthumous appeal against his conviction.

Gerard Sinclair, chief executive of the commission, said it was “now for the appeal court to decide whether there has been a miscarriage of justice in this case”.

Bill Matthews, chairman, said the commission’s role was not to decide on the innocence or guilt of an applicant. “Our function is to examine the grounds of review identified and to decide whether any of the grounds meet the statutory test for a potential miscarriage,” he said.

He was released from prison in August 2009 on compassionate grounds because he was suffering from terminal cancer. He returned to Libya where he died in 2012. He had always denied involvement in the bombing.

His release in 2009 caused a political storm, with the Scottish government criticised by the United States and some families of those who died in the bombing.

In 1999, Muammar Gadafy, Libya’s then ruler, agreed to extradite Megrahi and another Libyan, Ali Amin Khalifah Fhimah, on condition their trial was held on neutral ground.

This led to three Scottish judges sitting in a former US military base in the Netherlands, Camp Zeist, to hear the trial. Megrahi was convicted of 270 counts of murder but Mr Khalifah Fhimah was found to have “no case to answer”. – Copyright The Financial Times Limited 2020

1 Coronavirus: One more death in Republic as expert warns house parties are ‘disaster’ for containment
2 George Floyd death: Man shot and killed by law enforcement in Kentucky
3 Gardaí disperse crowds gathered at coastal beauty spots
4 Six counties free of new cases of Covid-19 over past week
5 How lockdown has helped us to save money - and find new ways to spend it
Real news has value SUBSCRIBE