Dr Li Wenliang, who tried to warn public of outbreak but was suppressed, dies from virus 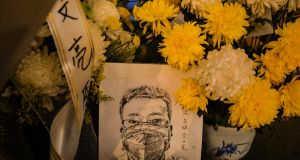 A card with a portrait of Dr Li Wenliang at the hospital in Wuhan, China where he died. Photograph: Shi Zhi/EPA

China’s leaders have launched an investigation into “issues raised by the masses”, following the death of a whistleblowing doctor who tried to warn the public of the dangers of a new coronavirus and later died from it.

Dr Li Wenliang was threatened by police after publicising his concerns about the novel virus in late December, and was forced to sign a confession at the time that he had “made false statements” and was “engaging in illegal behaviour”.

Dr Li was one of several whistleblowers in the medical profession who tried to sound the alarm about the dangers of the virus in the early weeks of the outbreak but were silenced by authorities.

Following news of his death, online platforms were awash with messages mourning the passing of a “national hero” and condemning the government for its handling of the crisis.

The two trending topics across China’s cyberspace for several hours on Friday were “We demand freedom of speech” and “Wuhan government owes Dr Li Wenliang an apology”.

In the wake of the public outcry, the Communist Party leadership announced on Friday it would send a team to Wuhan to “thoroughly investigate issues related to Dr Li Wenliang reported by the masses”.

The announcement came as the coronavirus death toll rose to 637 and the number of confirmed infections surpassed 31,200.

China’s National Supervisory Commission did not specify what exactly it would be investigating, but the announcement follows widespread public criticism of the lack of transparency in the early phase of the outbreak, prompting rare apologies from the Chinese authorities.

“Some of Dr Li Wenliang’s experiences during his life reflect shortcomings and deficiencies in epidemic prevention and control,” a report on state television said on Friday.

Speaking to Chinese media from his hospital bed a week ago, Dr Li broke his police-imposed silence and said he did not regret speaking out.

“It is more important for people to know the truth,” he said. “I believe there should be more than one voice in a healthy society. I don’t agree with the use of public power to overly interfere.”

Nicholas Bequelin, from Amnesty International, said Dr Li’s death was “a tragic reminder of how the Chinese authorities’ preoccupation with maintaining ‘stability’ drives it to suppress vital information about matters of public interest”.

China must learn a lesson from the case and “adopt a rights-respecting approach to combating the epidemic”, he said.

“Nobody should face harassment or sanctions for speaking out about public dangers, just because it may cause embarrassment to the government.”

Meanwhile, Japan confirmed another 41 new cases of the virus on Friday aboard the cruise liner Diamond Princess, bringing the total number infected on the ship to 61. All 3,700 passengers and crew are under a 14-day quarantine order.

In a phone call with US president Donald Trump on Friday, Chinese leader Xi Jinping urged the US to “respond reasonably” to the outbreak, according to the state news agency Xinhua.

Beijing has accused the US of overreacting to the epidemic by closing its borders to travellers coming from China and pulling its consular staff and citizens out of Hubei.

“A people’s war against the virus has been launched,” Mr Xi said. “We hope the US can assess the epidemic in a calm manner and adopt and adjust its response measures in a reasonable way.”

Mr Trump later tweeted: “Great discipline is taking place in China, as president Xi strongly leads what will be a very successful operation . . . leading the counterattack on the coronavirus.”

1 Coronavirus: Ireland should ‘look seriously’ at closing borders to keep new infections out
2 'The last time I saw her was when she was being put into the ambulance'
3 Engineers gather to produce ‘battlefield’ ventilator in war on Covid-19
4 People should carry ‘evidence’ of travel reasons if exceeding 2km limit
5 Coronavirus: Medical staff may face ‘emotional distress’ over patient prioritisation
Real news has value SUBSCRIBE