The Ohio-based global peace movement with a community focus 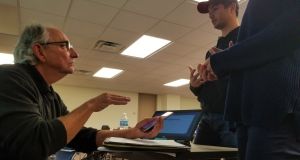 Ever since the peace accord that ended the Bosnian war was penned in his hometown of Dayton 25 years ago, Fred Arment has been moved to action.

By 2009, he and others had established the International Cities of Peace (ICP) initiative. “We thought [at the time] it could be regional and possibly global, and that was the motivation,” he says of ICP, the Ohio-headquartered non-profit he heads. Today, a decade later, more than 260 cities around the world have signed up to the organisation’s idea of a community-based peace.

From the European Union to the United Nations to the Non-Proliferation Treaty, peace movements have helped shape the modern world. Increasingly, however, cities are organising to meet their own community-specific needs on a scale that is smaller, localised and highly networked.

ICP’s efforts are centred on three aspirational pillars: establishing a safe living environment, the freedom to be prosperous and the right to enjoy a high quality of life. While those concepts may seem amorphous, the organisation, which doesn’t actively recruit member cities, has helped improve lives in concrete ways.

Member cities enjoy access to a network of hundreds of like-minded people across the world, each of whom is dealing with conflict in one or more of its various forms. Similar to the sister cities and twin towns ideas in terms of networking and dialogue capacities, ICP helps member cities with grant writing and seeking out avenues to fund projects. It also has special consultative status with the UN’s Economic and Social Council which allows members access a range of UN initiatives and human rights mechanisms.

“If you go to Mexico, they have such troubles that they need to teach children that there’s a better way,” he says of a country wracked by an average of 90 murders a day. The town of Badiraguato, with a population of a little over 3,000 residents and from where drug lord Joaquín “El Chapo” Guzmán emerged in the 1980s, is an ICP member. “It has had to redefine itself because it doesn’t want the drug lords to define their city,” says Arment, “so they have redesigned their whole approach to how they evaluate themselves”.

Arment was recently invited to China for a second time to appear as a guest at the annual commemoration of the 1937 Nanjing Massacre. The December 13th memorial marks the deaths of hundreds of thousands of civilians and unarmed soldiers at the hands of Japanese troops during the Second Sino-Japanese War. There were more than 8,000 people in attendance and the gathering emphasises peace as an important path forward for the two countries.

“The symbolic history of Nanjing is that it is a traumatised city,” says Liu Cheng, Unesco’s Chair of Peace in China and an ICP board member. But Nanjing “has been working on peace research, peace education and peace activities for nearly 20 years”. Nanjing University, where Liu works, is the first in China to establish a centre for peace studies. The city is also home to peace exhibitions, two peace institutes and a war memorial. It joined ICP in 2017.

While China may be traditionally suspicious of independent civil society organisations – not to mention American ones – last year Arment and others succeeded in getting Nanjing to host the first International Day of Peace, with the direct approval of the office of Communist Party general secretary Xi Jinping.

There’s a real retreat in terms of the idea of a global peace community. We need to create the infrastructure for peace through the city rather than through states

“I’ve received huge acceptance in this area. [Our] non-profit status separates it from some of the tension between countries,” Arment says. “The very fact that they honoured me as one of the three keynote speakers at last year’s commemoration shows that there is a great deal of trust between our groups.”

With the organisation marking a decade in action at a time when populism is rising around the world, the basic concept of peace, Arment says, from saving lives to boosting economic activity between and among cities, risks being shuffled to the sidelines.

“There’s a real retreat in terms of the idea of a global peace community. We need to create the infrastructure for peace through the city rather than through states,” he says. “The cities are where people live, where families are raised, where people work. With the refugee crisis, with climate change, people are starting to rely on cities as the unit from where we’re going to solve our problems in the future.”