Terror will not divide Austria, chancellor says in wake of Vienna attack

Austrian interior minister Karl Nehammer says the gunman who killed three people and injured several others in an attack in Vienna was "a supporter of the terror organisation IS." Video: Reuters 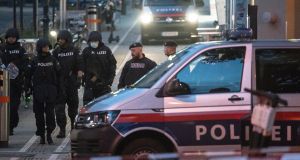 Austrian chancellor Sebastian Kurz has insisted Islamist terror will not scare or divide his country, hours after a shooting attack in inner-city Vienna.

The gunman, named locally as Kujtim Fejzulai, was a 20-year-old man with dual Austrian and North Macedonian citizenship.

Police shot him dead around nine minutes into his shooting spree with an AK-47 assault refile; he announced the attack in advance on Instagram in a message professing his allegiance to the Islamic State terror group.

The man’s victims, Mr Kurz said in a televised address, were “an older man, an older woman, a young male passerby and a waitress”.

“The enemy, Islamist terror, wants to split our society, but we will give no space to this hatred,” added the chancellor, insisting the perpetrators were terrorists and not members of a religious community. “This is not a fight between Christians and Muslims, or Austrians and migrants, but a fight between civilisation and barbarity.”

Mr Kurz ordered three days of mourning after the attack, led a minute’s silence at noon and attended a religious ceremony on Tuesday evening. He conceded his country was no longer an “isle of the blessed”, spared the kind of violence familiar to neighbouring countries.

In the afternoon he laid a wreath at the scene of the shooting alongside President Alexander Van der Bellen, who said Austria had been through “a dark night”.

One of the dead was a German woman. Seventeen people were still being treated hospital on Tuesday, seven in a serious condition. Among the wounded is a police officer shot in the attack, said to be in a critical but stable condition.

The gunman, wearing a fake explosive belt, launched his attack at about 8pm on Monday among revellers, out for the night in Vienna’s popular “Bermuda Triangle” area, before a second lockdown began on Tuesday.

The man had a criminal record and had been released early from prison last December where he was serving a 22-month sentence for planning a tip to Syria to join Islamic State, the terror group also known as Isis.

The shooting took place outside Vienna’s main synagogue. Mr Kurz said this “was probably not a coincidence”, though Oskar Deutsch, president of the city’s Jewish community, said it was “unclear” if the synagogue, which was empty at the time, was a target.

Police said it was likely the gunman fired his weapon at six different locations in total; after ordering Viennese residents to stay at home, authorities said on Tuesday afternoon it was unlikely there was a second attacker.

Police carried out a series of raids across Austria on Tuesday, arresting 14 people.

Footage on social media, purportedly of the attack, shows a man in a white shirt with a rifle shooting at a building.

“We heard the shots and then it was ‘lights out, doors closed’,” a 53-year-old eye witness told the APA news agency. “Then we all lay on the ground, the fear among the guests was crazy.”

Another witness told ORF television he thought he was hearing the sound of fireworks. “Then it was clear it was shots,” said the man, who asked not to be named. “Then there was a man running down Seitenstetten street who shot around him crazily with an automatic weapon.”

Interior minister Karl Nehammer confirmed the police were treating the shootings as a terrorist attack.

“Austria is a democracy, shaped by free speech, tolerance and living alongside one another,” he said. “The attack yesterday is an attack on these values and an inadequate attempt to divide us. We will not stand for this. There will be consequences.”

Among the heroes of the Monday night attack are two Viennese mixed martial arts fighters. One, Mikail Özen (20), told journalists how they dragged a wounded woman and police officer to safety as bullets flew and Mr Özen’s friend was wounded in the leg by shrapnel.

“The gunman was only a few metres away,” said Mr Özen. “We didn’t think of the dangers, we just knew to do something, we had to help.”

EU leaders condemned the killing, with French president Emmanuel Macron saying Europe must not “give up” in the face of such attacks as in Austria and in France.