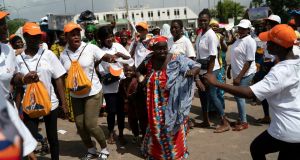 Ivory Coast president Alassane Ouattara has been re-elected to a third term in the world’s largest cocoa producer, claiming a landslide 94.27 per cent of the vote in an election that was boycotted by the opposition and raised concerns about democratic backsliding in the region.

The head of the electoral commission on Tuesday morning declared Mr Ouattara (78) the provisional winner of the vote in francophone Africa’s economic powerhouse. The results must be certified by the constitutional council, which will hear complaints and challenges, which opposition parties are expected to make.

Opposition leaders Henri Konan Bédié, a former president, and Pascal Affi N’Guessan, a former prime minister, had told their supporters to boycott the polls. On Monday night, they said that Mr Bédié, who said his home was attacked during Saturday’s election, would lead a national transitional council to organise free and fair elections.

Idayat Hassan, head of the Abuja-based Centre for Democracy and Development, praised the opposition for remaining peaceful, and said its declaration amounted to “the formation of a parallel government”.

“The way out is for a dialogue among the actors,” she said, given that “the election [was] robbed of integrity even before polling day”.

Mr Ouattara’s decision to seek a third term, which is barred by the constitution, heightened tensions in a country that has never had a peaceful transition of power, raising memories of two bloody civil wars that left thousands dead in 2002 and 2011. At least 30 people died in pre-election violence, with another five killed on Saturday, according to officials, far fewer than after previous elections.

The US-based Carter Center, which acted as an international observer of the election, “expressed serious concerns about restrictions on civil liberties, freedom of expression, and the right to vote and be elected”. The group said turnout was much higher in the president’s northern stronghold.

“This situation threatens the democratic advances consolidated by the country over the past decade,” it said in a statement. “In addition, these problems increase the risk of conflict and violence and may lead to a decline in democracy that could extend beyond the country’s borders.”

The African Union observer mission said in a statement that the election had “proceeded in a generally satisfactory manner”. The EU said it had “deep concerns about the tensions, provocations and incitement to hatred that have prevailed and continue to persist in the country around this election”.

French president Emmanuel Macron had asked Mr Ouattara in a September meeting in Paris to postpone the election, and had previously tried to dissuade him from running at all, amid mounting concerns of violence in the former French colony. The French have yet to comment on the result.

Mr Ouattara had for years publicly toyed with running again. In March he said he would step aside, earning praise from world leaders, but when his anointed successor died suddenly this summer, he stepped back in, arguing that he had to “respond favourably to the call of my fellow citizens”.

He has argued that the constitution’s two-term limit does not apply to him because it was adopted five years into his tenure.

The election raised concerns about democratic progress in West Africa. In nearby Guinea, Alpha Condé was recently re-elected to his own controversial third term, while Mali this summer saw a military coup unseat the democratically elected president.

The president has been praised for his economic stewardship, guiding the west African country to roughly 8 per cent annual gross domestic product growth since he took office in 2011. He has pledged a massive $112 billion (€95 billion), five-year investment plan focused on infrastructure in his third term.

But seeking a third term, and the lopsided results, risked tarnishing his reputation, said Ms Hassan.

“He has removed himself from [being among] the few elder statesmen on the continent or even the morality to be a mediator in the future,” she said. – Copyright The Financial Times Limited 2020