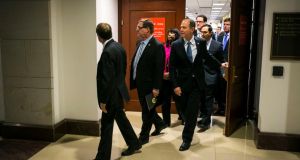 Tensions between the Trump administration and US intelligence agencies have heightened further after a congressional committee took the highly unusual move of releasing a memo detailing what it claims are flaws in the agencies’ approach to the Russia investigation.

The US department of justice had urged the House of Representatives intelligence committee – one of several congressional bodies investigating alleged Russian interference in the 2016 presidential election – not to release the controversial document, arguing that, as it contained classified information, it would be “extraordinarily reckless” to do so. But members voted along party lines to release the Republican-drafted memo.

It reportedly claims that the deputy attorney general, Rod Rosenstein, failed to adequately explain to a federal judge why he wanted to increase FBI surveillance of Carter Page, an adviser to President Trump during his election campaign. In particular, Republicans believe that the department of justice did not make clear that the information used to justify increased surveillance of Mr Page was based in part on a controversial dossier compiled by the Fusion GPS consultancy and originally financed by Democrats.

Mr Trump, who received a copy of the top-secret memo on Monday evening, has five days to decide whether to make it public. He has previously called for its content to be released, as have several Trump allies, with the online campaign #releasethememo gaining traction in recent weeks.

Republicans on the committee also voted against releasing a Democratic memo that essentially rebutted the Republican-drafted document.

Adam Schiff, the top Democrat on the committee, accused Republicans of politicising the intelligence services. “Sadly, we expect that the president of the United States will not put the national interest over his own personal interest,” Mr Schiff said. “But it is a sad day indeed when that is also true of our own committee.”

The issue threatened to overshadow Mr Trump’s state-of-the-union address to Congress on Monday night, during which he was expected to call for unity and bipartisanship. As he prepared to deliver his speech, Congress was anything but unified, particularly on the Russia investigation.

The controversy about the memo has become a lightning rod for divisions over the ongoing special-counsel investigation led by Robert Mueller, with many senior Republicans arguing that the investigation is inherently biased against Mr Trump.

The memo’s release comes a day after the resignation of Andrew McCabe, the deputy director of the FBI. Mr McCabe has been the target of several Twitter attacks by the president, with Mr Trump highlighting his wife’s links to the Democratic Party, although the White House said the president had nothing to do with Mr McCabe’s departure.

The White House has also said it will not extend sanctions on Russia under a law introduced by Congress last August to punish Moscow for meddling in the US election. The administration argued that there was no need to impose new measures – designed to punish those who have done business with Russia’s defence or intelligence sectors – as the law itself was a deterrent.

But the Trump administration later angered Moscow by publishing a list of more than 200 Russian business oligarchs who are close to the Kremlin that was drawn up as part of the sanctions package. Although the US treasury said it would not be sanctioning them currently, the publication of the list elicited a terse response from Russia. President Vladimir Putin described it as an unfriendly act that would complicate its relations with the United States.

Man tested for symptoms linked to coronavirus in Belfast 19:19
Greece urged to evacuate ill children from refugee camp 18:58
Serbia and Kosovo urged to compromise in bid by US to end impasse 18:53
Netanyahu denounces Iran as anti-Semitic at Holocaust forum 18:35
Actor alleges Weinstein raped her: ‘I couldn’t fight anymore’ 18:03