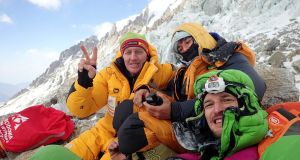 French mountain climber Elisabeth Revol was on her way from Islamabad, Pakistan to a hospital in the French Alps late on Tuesday, after surviving a harrowing rescue on the 8,125m “killer mountain” Nanga Parbat in the Pakistani Himalayas.

Revol (37) had to make the wrenching decision to abandon her rope partner, Kildare-based Polish climber Tomasz Mackiewicz (43) at 7,280m. Mackiewicz was immobilised by severe frostbite, snow blindness and pulmonary and brain edema.

“She saved her skin,” Yannick Graziani, the leading French Himalayan climber told Libération newspaper. If Revol had stayed with Mackiewicz, “She would have died within two days. Obviously she took the right decision and no one will judge her.”

Revol is suffering from severe frostbite on her hands and feet, and French doctors will decide whether to amputate. Before she left Islamabad on Tuesday, she promised to return to the Himalayas, “but not Nanga Parbat”.

In February 2016, three climbers from Italy, Spain and Pakistan became the first to ascend Nanga Parbat in winter. Revol and Mackiewicz, who are understood to have made it to the summit and were descending when they got into difficulty, were the second team to do so. She is the first woman. It was her third try; Mackiewicz’s seventh.

Revol contacted her logistician in the French Alps via satphone on the night of January 25th-26th to tell him that she and Mackiewicz were in trouble. He raised €50,000 by crowdfunding to finance a rescue mission. The Pakistani Himalayas are a military zone and only army helicopters can fly there.

By good fortune, a team of Polish climbers led by Adam Bielecki were 160km away, preparing to ascend the world’s second highest mountain, the 8,611m K2. Eastern Europeans, particularly Poles, have made a speciality of climbing the Himalayas in winter. The Polish team had already adjusted to the altitude and offered the only possibility of saving Revol and Mackiewicz. “We all agreed,” Bielecki told Polish television. “Our priority was to save lives.”

The Pakistani army helicopter transported four Poles from K2 to Nanga Parbat, leaving them at a base camp at 4,800m late on January 27th. Two stayed at the camp. Bielecki and the Kazakh-Polish climber Denis Urubko headed immediately up the sheer face of the mountain. In temperatures of between -30 and -40 degrees, they climbed 1,200m in just eight hours, an ascent that usually takes two to three days.

In the meantime, Revol continued inching down the mountain face, at an extremely slow pace.

So many people were following Bielecki and Urubko’s ascent via their GPS signal that the rescuers asked them to stop, for fear the traffic would interfere with transmission. Some were posting maps of their progress on Twitter.

At about 2am on Sunday, Bielecki and Urubko found Revol at around 6,000m. “It was very dark. I couldn’t see anything,” Urubko told the Spanish mountaineering website Desnivel. In a short video posted on YouTube, one hears him say, in English and Polish,“Elisabeth. Nice to see you. Adam, I hear her.”

Revol was weak, exhausted and extremely dehydrated. Biekelcki and Urubko set up a small tent, gave her medicine and water and let her rest. The Poles were confronted with the same terrible decision that Revol had made earlier.

“We had to choose. Either we helped Elisabeth survive, or we continued up with very little chance of finding Tomek,” Urubko said.

“We knew that even if we got to Tomek, we couldn’t help him. It was a very difficult moment,” Biekecki added.

The Poles began their descent with Revol at about 4am. The army helicopter flew her from the base camp to Islamabad.

This is the second time that Revol has lost a rope partner. In 2009, she was climbing the Nepalese peak of Annapurna, 8,091m, when her Czech team mate Martin Minarik disappeared. He was never found. She stopped climbing for four years.

Bielecki lost two Polish team mates during an expedition in 2013.

In 1985, British climbers Simon Yates and Joe Simpson reached the top of Siula Grande peak in the Peruvian Andes. Simpson broke his leg, slipped and was suspended by a rope over a deep ravine. Yates realised they would both die if he continued holding the rope, which he cut. Simpson survived his consequent fall, however, crawled back to base camp and wrote the best-selling book Touching the Void.