India moves to set up overseas military base in Seychelles 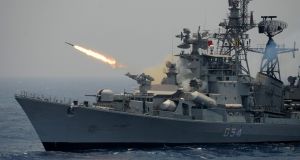 A rocket is fired from the Indian Navy destroyer ship INS Ranvir during an exercise drill in the Bay Of Bengal off the coast of Chennai on April 18th, 2017. Photograph: Arun Sankar/AFP/Getty Images

India is to establish its first overseas military base on the Seychelles archipelago, considerably strengthening its naval presence in the Indian Ocean to counter growing Chinese hegemony in the strategically critical region.

India’s foreign secretary Subramaniam Jaishankar and the Seychelles secretary of state Barry Faure signed an agreement at the weekend in the island republic’s capital Victoria, approving an Indian navy base and air strip on Assumption Island.

“This [agreement] reinforces our commitment to not only further deepen India-Seychelles relations but also take our partnership to another level,” Mr Jaishankar said in a statement after signing the agreement.

Diplomatic and naval officials said the treaty agreement was a revised version of an earlier one signed by prime minister Narendra Modi during his Seychelles visit in March 2015. The earlier agreement, however, failed to secure ratification by the Seychelles parliament amid concern over its legality.

“It [the new agreement] is a significant measure by India to secure a firmer presence in the vital Indian Ocean region,” said former Indian navy chief of staff Admiral Arun Prakash. The Indian navy can now monitor vital sea lanes, he added.

India had already provided Seychelles with a maritime reconnaissance aircraft, two helicopters and a coast guard intercept boat. It also installed a coastal surveillance radar system on one of Seychelles’ many islands to gather intelligence.

India fears encirclement by an increasingly militarist China under this strategy, which it also refers to as the “string of pearls” initiative.

Under this, China has secured diplomatic, military, commercial and strategic arrangements with countries such as Bangladesh, Maldives, Myanmar, Sri Lanka and Pakistan, among others, a development that India believes could lead to its isolation.

India is presently in the process of negotiating a “quadrilateral” arrangement with the US, Japan and Australia to counter China.

The nuclear-armed neighbours fought a war in 1962 over an unresolved border dispute, in which India came off worse.