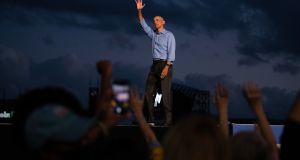 US president Donald Trump and Democratic opponent Joe Biden will face off in their second and final debate tonight in Nashville, Tennessee, with just 12 days to go until election day.

Following the first rancorous debate that saw Trump repeatedly interrupt his opponent, and Biden telling the president to “shut up” at one point, the commission on presidential debates is allowing the moderator to mute the microphones, at least during the candidates’ initial responses to each question.

14 Man who stole more than €95,000 in social welfare under false names jailed

17 Some 5,300 people waiting over two years for Irish citizenship application to be processed

20 WHO warns about risks of ski holidays and Christmas gatherings

25 Ryan Tubridy swears he dropped a B-bomb, not an F-bomb, on Late Late Toy Show

29 Man (30s) charged with murder of woman and two children

32 Government may yet face hardest call on Covid-19 restrictions

35 Restaurant bookings surge before reopening with ‘busiest December’ ahead