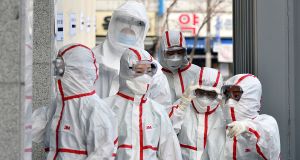 South Korea has declared “war” on the coronavirus as cases inside the country approach 5,000 and the World Health Organization chief warns the world is in “uncharted territory”.

South Korea has the most cases of Covid-19 after China and reported 600 new infections on Tuesday, bringing the total number to 4,812. About 75 per cent of the cases are in the southeastern city of Daegu.

The country also recorded a total of 28 deaths, pushing global fatalities over 3,100. Worldwide infections topped 90,000 in more than 60 countries.

President Moon Jae-in said the country was now waging a “war” on the virus and the government would inject US$25bn into measures to contain it.

“The crisis in Daegu and North Gyeongsang province reached its peak and the whole country has entered a war against the infectious disease,” Mr Moon said, referring to the areas where the outbreak has been the worst.

He ordered all of the government’s organisations to shift to a “24-hour emergency situation room system”.

As South Korea stepped up efforts to contain the virus’s spread, the WHO sent experts to Iran, which has more than 1,500 confirmed infections and 66 deaths from Covid-19 – the highest number of fatalities outside China.

The semi-official Fars news agency said Iran was “accelerating measures” in the fight against the virus, stepping up the production of face masks and sterilising materials.

A government spokesperson said that efforts were being made to boost production of masks to 1.5 million per day, Fars reported.

France, Germany and the UK were among countries that pledged to send emergency medical supplies to Iran. Health authorities there said teams would be deployed on Tuesday to go house-to-house checking on residents and disinfecting streets.

The WHO chief Tedros Adhanom Ghebreyesus said at a briefing in Geneva on Monday that the outbreaks in Iran, South Korea, Italy, and Japan were the most worrying.

“We are in uncharted territory with Covid19,” he said. “We have never before seen a respiratory pathogen that is capable of community transmission, but which can also be contained with the right measures.”

“But containment of Covid-19 is feasible and must remain the top priority for all countries. With early, aggressive measures, countries can stop transmission and save lives.”

- China reported 125 new cases on Tuesday, its slowest daily increase in six weeks (eight times as many cases were recorded outside of China as inside in the last 24 hours).

- Italy, Europe’s worst-hit country, recorded a spike in deaths to 52 from 18 as the number of confirmed cases reached 1,835.

- Health officials in the US, where 91 cases have been confirmed, said six people in the Seattle area of Washington state have died of Covid-19.

- Washington has 18 confirmed cases, the most of any state in the US, eight of which have been linked to a nursing home in Seattle.

- The Australian prime minister warned against panic buying, as the central bank cut interest rates to a historically low 0.5 per cent in an attempt to protect the economy.

- UK supermarkets draw up plans to ‘feed the nation’.

In China, Wu Qian, a spokesman of the Ministry of National Defence said that the government had decided to include biosecurity as part of the national security system and the government will speed up the drafting of a new biosafety law.

“This epidemic has highlighted the importance of biosecurity,” he said, according to the state-run China Daily. “China will speed up the process of building the legal and support apparatus for national biosecurity.”

Chinese authorities asked overseas-based citizens to reconsider or minimise their travel plans as the epidemic spreads across the world and prompts an uptick of imported cases arriving in the country.

“We are trying to distance ourselves from the virus, but what cannot be broken is the flesh and blood relationships between overseas Chinese and their families in their hometowns,” said the government of Qingtian county in the southeastern Zhejiang province. - Guardian