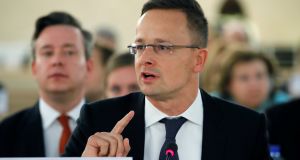 Budapest has warned Kiev that it will respond to any action that it takes over secretly recorded footage that seems to show people in western Ukraine being granted Hungarian citizenship and told not to inform the Ukrainian authorities about it.

The spat further strains ties between the neighbours, who are already at odds over Ukrainian education reform that Budapest says discriminates against ethnic Hungarians; in retaliation, Hungary has blocked some co-operation between Kiev and Nato, at a time when Ukraine relies on western support in its struggle with Russia.

Footage emerged on Wednesday that appears to show people receiving Hungarian citizenship and swearing an oath of loyalty to Hungary at its consulate in Berehove, western Ukraine.

Consular staff offer them congratulations and a glass of sparkling wine and advise them, in Hungarian, not to reveal that they have a second citizenship to the Ukrainian authorities.

Ukrainian law neither recognises nor explicitly prohibits dual citizenship but the subject has become highly sensitive since 2014 when, following Ukraine’s pro-western revolution, Moscow annexed Crimea and fomented a separatist uprising in eastern Ukraine, where most of the country’s ethnic Russians live.

The Budapest government of Viktor Orbán, meanwhile, has been extending its influence among the two million or so ethnic Hungarians who live in neighbouring states, doling out more than one million passports – with voting rights – since 2011.

“We already knew full well that it was happening and we warned our Hungarian colleagues about it,” Ukrainian foreign minister Pavlo Klimkin said of Budapest’s alleged surreptitious distribution of passports to citizens of his country.

“But this is already proof and with this proof one can’t remain silent – one needs to react. I know how we will react – this consul will go to Budapest or some other Hungarian town but he, in actual fact, is just a cog in this diplomatic machine.”

On Twitter, Mr Klimkin added: “Hungary has two options. Either prove that the video of the granting [of citizenship] is fake, or take action immediately. I think only the second one is realistic.”

Mr Klimkin said he would discuss the issue with Hungarian counterpart Péter Szijjártó in New York next week at the UN General Assembly.

Budapest “will not allow the Ukrainian administration to further worsen the situation of [the country’s] Hungarians, and condemns the attempts to intimidate them in the strongest possible terms,” Mr Szijjártó said on Thursday.

The expulsion of the consul in Berehove “would place relations between the two countries in another dimension and would not remain unanswered”, he added.

“Hungary is continuously monitoring developments and it is possible that further measures to slow Ukraine’s integration [with the west] may also be required in future.”