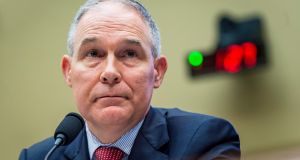 Scott Pruitt pictured before the US House Energy and Commerce Environment subcommittee in Washington in April. Photograph: NYT

US president Donald Trump said he had accepted Mr Pruitt’s resignation. EPA deputy administrator Andrew Wheeler will now take over the top position in an acting capacity, the president tweeted.

Mr Pruitt had been hailed as a hero among conservatives for his zealous deregulation, but he could not overcome numerous ethics questions about his alleged spending abuses, first-class travel and cozy relationships with lobbyists.

Mr Pruitt also came under fire for enlisting aides to obtain special favors for him and his family, such as reaching out to the chief executive of Chick-fil-A, Dan T Cathy, with the intent of helping Mr Pruitt’s wife, Marlyn, open a franchise of the restaurant.

Mr Pruitt, a former Oklahoma attorney general who built his career on lawsuits against the agency he would eventually lead, remained a favorite of Mr Trump’s for the majority of his tenure at the EPA.

He began the largest regulatory rollback in the agency’s history, undoing, delaying or blocking several Obama-era environmental rules. Mr Pruitt also played a lead role in urging Mr Trump to follow through on his campaign pledge to withdraw the United States from the 2015 Paris climate agreement on reducing emissions.

...on Monday assume duties as the acting Administrator of the EPA. I have no doubt that Andy will continue on with our great and lasting EPA agenda. We have made tremendous progress and the future of the EPA is very bright!

In 2017, Mr Pruitt made headlines for questioning the established science of human-caused climate change, contradicting decades of research by scientific institutions, including his own agency.

Mr Trump has repeatedly told associates that Mr Pruitt has done what he has wanted in terms of cutting regulations, so he has been reluctant to let him go. Mr Pruitt has made himself available to the president as a confidante as well as a possible next attorney general.

But ultimately the president grew disillusioned with Mr Pruitt after a cascade of accusations of impropriety and ethical missteps overshadowed Mr Pruitt’s policy achievements.

In recent days, people who have spoken with Mr Trump said he sounds exasperated with his EPA administrator’s negative headlines. “It’s one thing after another with this guy,” one person close to Trump quoted the president as saying.

Mr Pruitt is the subject of at least 13 federal investigations, and a government watchdog agency concluded he had broken the law with his purchase of a $43,000 secure telephone booth.

He was also under investigation for his 2017 lease of a bedroom in a condominium linked to a Canadian energy company’s powerful Washington lobbying firm, and for accusations that he demoted or sidelined EPA employees who questioned his actions.

Mr Pruitt had come under criticism for lavish expenditures on foreign travel, including a trip arranged for him by a lobbyist to Morocco, a country where the EPA has no policy agenda. His domestic travel also came under fire after a former staff member told congressional investigators that his boss often sought to travel to Oklahoma, where Mr Pruitt owns a home, directing his employees to “find me something to do” there so he could justify charging taxpayers for the expense.

In recent months even conservative Republicans had taken the unusual step of criticising and questioning his ethics. Trey Gowdy, chairman of the House Oversight Committee, has started an investigation into Mr Pruitt’s actions at the EPA, the first such Republican-led inquiry into a Trump administration Cabinet member.

On May 2nd, Mr Gowdy’s staff began conducting transcribed, behind-closed-doors interviews with Mr Pruitt’s closest aides. Partial transcripts from one of those interviews revealed that Pruitt used one of his top aides last year essentially as a personal assistant, having her help him search for an apartment as well as try to procure a used mattress from the Trump International Hotel. – NYT