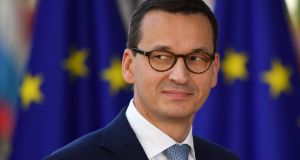 The European Commission on Monday opened a new legal front in its battle with Warsaw over the dilution of the rule of law in Poland by the ruling Law and Justice party.

A day before some 27 of the supreme court’s 72 judges are due to be retired under the country’s controversial judicial reforms, the commission issued urgent infringement procedures against Poland, which could end up in the Court of Justice of the European Union.

It alleges that the involuntary early retirement of the judges – and that of the first president of the supreme court, Malgorzata Gersdorf, whose six-year mandate would be prematurely terminated – violates the principle of judicial independence and puts Poland in breach of both its obligations under Article 19(1) of the Treaty on European Union and of Article 47 of the EU Charter of Fundamental Rights.

The move, a commission spokesman said on Monday, is running in parallel with the commission’s “preferred” approach of political dialogue with Warsaw, which is already proceeding under the Article 7 political procedure invoked by the council of ministers.

This process, to establish “a clear risk of a serious breach by a member state of the common values” of the EU, could lead to a vote by member states to deprive Poland of its vote at the council.

Since Mateusz Morawiecki replaced Beata Szydlo as prime minister late last year, Poland has made various amendments to its judicial overhaul in a bid to find a way out of the dispute with the EU.

However, in recent weeks talks between Brussels and Warsaw have reached an impasse. Vice-president of the commission Frans Timmermans said last month that the changes were insufficient, while Polish officials insisted they were not planning further amendments.

Poland has one month to respond to the commission’s letter of formal notice.

Meanwhile, the Irish High Court will probably also get to consider the same issue – specifically whether the Polish rule of law regime has made impossible a fair trial of a Polish man held in jail in Ireland.

The advocate general of the Court of Justice last week gave his opinion of an Irish reference to the court on the issue, and argued that the court would have to find a specific threat to the accused’s trial if it wanted to hold up the extradition.

The full court usually follows the opinion of the advocate general.