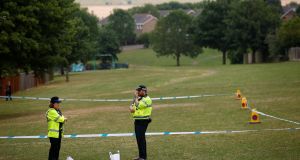 Police officers stand next to a section of playing field near Amesbury Baptist Church in Amesbury. Photograph: Henry Nicholls/Reuters. 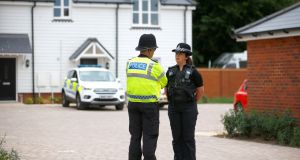 Police officers stand in front of a housing development on Muggleton Road, Amesbury, which has been cordoned off. Photograph: Henry Nicholls/Reuters. 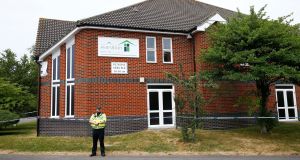 A police officer stands in front of Amesbury Baptist Church which has been cordoned off. Photograph: Henry Nicholls/Reuters.

Britain’s counter-terrorism chief said on Wednesday that two people who are critically ill in hospital in Wiltshire were exposed to the Novichok nerve agent, the same toxin that was used in an attack on Russian former spy Sergei Skripal.

The man and woman, both British and in their 40s, were found unwell at a house in Amesbury on Saturday, close to Salisbury where Mr Skripal and his daughter Yulia were poisoned with the nerve agent in March.

Amesbury Metropolitan Police Assistant Commissioner Neil Basu said it was line of inquiry over whether this incident was linked to the poisoning of the Skripals.

He said there was no intelligence to indicate that the man and woman were deliberately targeted.

Mr Basu also told reporters police did not yet know how the Novichok nerve agent was transmitted.

He said the risk to the public was low and gave assurances that sites which have already been decontaminated are safe.

He said at least five different areas had been cordoned off, including a park and a property in Salisbury, and a pharmacy and a Baptist church community centre in Amesbury.

Britain blamed the poisoning of the Skripals on Russia, prompting a serious diplomatic crisis between Moscow and western states. Russia denied any involvement.

Mr Mills said emergency services were called on Saturday morning to a house in Amesbury after the woman collapsed and returned later in the day when the man also fell ill. – Reuters