Angela Merkel says Germany will hold migrants registered in other EU countries in transit centres while it negotiates their return, hailing a deal reached with her Bavarian allies that had threatened her government. Video: Reuters 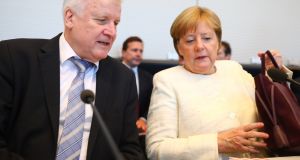 Chancellor Angela Merkel and her Bavarian allies have salvaged their political alliance - and the German government - by agreeing to set up closed “transit” camps on the German-Austrian border to fast-track asylum applications.

“After a tough struggle and some difficult days, we’ve found a really good compromise,” said Dr Merkel, the CDU leader.

The deal salvages Dr Merkel’s chancellorship and will see her interior minister Horst Seehofer, the CSU leader, stay on in Berlin after he threatened to resign on Sunday evening.

“We agreed after very intense negotiations,” he said after the meeting. “This is a clear agreement to prevent illegal immigration in future on the German-Austrian border.”

The “transit centre” proposal marks a radical shift from Dr Merkel’s liberal “we can manage this” approach to the refugee crisis in 2015 and reflects a darkening public mood to immigration after high profile attacks.

The CSU leader had vowed to impose unilateral border controls to turn back asylum seekers already registered elsewhere in the EU. Dr Merkel had refused to accept any such solo runs by her interior minister, fearing it would prompt countermeasures in the EU and undermine the bloc’s free travel area.

It remains to be seen how the late-night deal in Berlin - the latest in a long line of compromises between the CDU and CSU on the emotive immigration issue - will function in reality.

The plan foresees the erection of “transit centres” at three border crossings between Germany and Austria. Migrants seeking asylum in Germany will not officially enter the country but be directed instead into ex-territorial camps for expedited examination of their claim. If rejected, they will be returned to their country of origin in the EU or, failing that, to Austria “on the basis of an agreement with the republic of Austria”.

No such agreement with Austria exists, and Austrian chancellor Sebastian Kurz, heading an immigration-critical right-wing populist coalition in Vienna, warned on Sunday he took a dim view of Germany returning migrants over the border.

He promised to respond with measures to “prevent damage” to his country that “will involve enforced measures on the border to Germany”.

Also unclear is whether the CDU/CSU’s junior partner in Berlin, the Social Democratic Party (SPD), will accept the proposals. Three years ago, when the CSU proposed transit camps, then SPD leader Sigmar Gabriel dismissed the idea as “arrest zones”.

On Monday evening, current SPD leader Andrea Nahles welcomed the CDU/CSU agreement but said she would study closely proposals she knows will rile her party’s left-wing.

It is also unclear how many asylum seekers will be affected by the new proposals. So far this year more than 18,000 people who filed for asylum in Germany had fingerprints already filed in the Eurodac system in another EU member state.

Last year German police at the Bavarian-Austria border crossing turned back around half of the 14,600 people they detained trying to enter Germany illegally. In the first four months of this year they registered 3,800 illegal entries and 2,100 returns.

As well as political uncertainty, German legal experts are in disagreement on whether the courts will back the new procedure. The CDU and CSU base their proposal on a line in asylum law saying a traveller “only passes a border when he has passed the control stations of the border police and customs”.

The courts are likely to be asked if this “airport transit” rule can be applied to the 800km green border between Bavaria and Austria - or if it undermines a fundamental principle of German law allowing everyone who enters the country to file for asylum.

But any such court challenge is likely to come well after October 14th’s state election in Bavaria. CSU hopes its high-risk migration stand-off will attract back voters from the far-right Alternative für Deutschland, currently impeding their return to power with an absolute majority.

Leading CSU officials expressed confidence on Tuesday the deal will have the desired effect.

“The security of our country,” said CSU general secretary Markus Blume, “begins at the border”.