Thailand cave rescue: Race to extract group ahead of rains

Mario Sepulveda, one of the Chilean miners who was rescued after 69 days underground, has sent a message of support to the group of 12 boys and their football coach trapped in a flooded Thai cave. Video: Thai Navy Seals/Mario Sepulveda 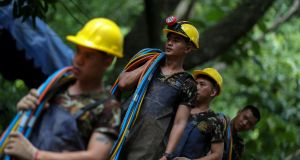 Thai rescuers say 12 boys trapped deep inside a cave complex may be able to walk out, provided the route can be drained before monsoon showers that are predicted for the weekend.

A military operation in the Tham Luang Nang Non cave complex is employing hundreds of industrial pumps to drain the water along the 4km path from the entrance to the area where the children and their football coach have been sheltering for 12 days.

Poonsak Woongsatngiem, a rescue official with Thailand’s interior ministry, said the water had been reduced by 40 per cent in past days, clearing a 1.5km stretch of dark, jagged and muddy cave channels that the boys would need to traverse.

The focus of Thursday’s operations is a third major basin along the route where water still reaches to the ceiling. The boys, who are not strong swimmers, are being trained in how to dive using scuba equipment. But forcing them to exit through the water is considered very risky.

“We [are] target[ing] the water in the third chamber to reduce to the point that no diving equipment is needed, like to the waistline, so one can wear just life jackets and walk out,” Mr Woongsatngiem said on Thursday.

Clearing the third basin would leave another 2.5km of path to the boys, whose ages range from 11 to 16. A Chinese diver at the site, Wang Ying Jie, said about half that remaining path would be walkable in the right conditions; the maximum water depth they would need to cross is about six metres.

It is unclear how long the remaining area would take to drain, but monsoon rains are predicted for Saturday and would quickly refill the cave complex, potentially cutting the boys off for months.

Rain was the biggest worry, said Narongsak Osatanakorn, the governor of Chiang Rai province, who is co-ordinating the rescue efforts. “I’ve asked the meteorological department to check the weather forecast and report to us daily,” he said.

A fibre-optic cable was being laid inside the cave and would reach the boys soon, he added, so the children would be able to speak to and possibly see their parents on video.

Mr Wang said most of the boys remained in good health but three had intestinal issues and were in some pain. Divers were positioned at the third basin waiting to ferry medicine to the children.

With wet weather looming, authorities are also calculating how long they are willing to allow rescuers to remain in the cave before they order an evacuation.

Updates on the condition of the boys and the water levels were being slowed by the length of the journey to reach the children. “It’s about 11 hours – six on the way from the entrance to where the kids are and five on the way back,” he said.

He said the boys and their 25-year-old coach had started practising diving but did not confirm whether they would try to bring any out on Thursday. Those considered strong enough to go could do so first, he said. “They don’t need to be brought out as a team,” Mr Osatanakorn said. “Whosoever is ready can come out first.”

Officials were also scouring the jungle above the complex to find new openings that could be drilled to extract the boys more easily. The children were breathing, he said, so there was very likely a shaft somewhere to the top.

“We have around 20 to 30 teams surveying on top to find the closest and most precise spot,” he said.

One Thai navy Seal member who spent time with the boys said they “were always asking about the World Cup. I told them that all the big teams had gone home.” – Guardian