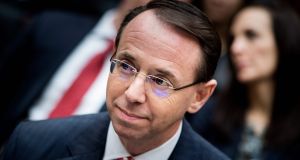 Deputy attorney general Rod Rosenstein has rejected calls by Republican politicians for special counsel Robert Mueller to be removed from the Russia investigation, dismissing allegations of anti-Trump bias in the FBI.

Testifying before the House Judiciary Committee on Wednesday, Mr Rosenstein described Mr Mueller as a “heroic public servant” who “protected this nation after 9/11”, and “based upon his reputation, service and patriotism was an ideal choice for this task”.

His scheduled appearance at the committee came amid renewed calls from some congressional Republicans for Mr Mueller to be removed following revelations that two senior members of his team sent anti-Trump text messages.

The two individuals involved – FBI agent Peter Strzok and senior FBI lawyer Lisa Page – are no longer working on the investigation. Mr Mueller dismissed Mr Strzok from the investigation on learning of the texts, while Ms Page’s assignment had already ended.

Mr Rosenstein, the number two at the justice department who appointed Mr Mueller to lead the investigation after FBI director James Comey was fired in May, rejected suggestions that the Russia investigation had an anti-Trump bias.

“We recognise we have employees with political opinions. It’s our responsibility to make sure those opinions do not influence their actions,” he said. “I believe that director Mueller understands that and he is running his office appropriately.”

But the top Republican on the committee, Bob Goodlatte of Virginia, said news of the text messages was “deeply troubling to all citizens who expect a system of blind and equal justice”, adding: “Department of justice investigations must not be tainted by individuals imposing their own political prejudices.”

Separately, secretary of state Rex Tillerson indicated that the United States may be prepared to open talks with North Korea “without precondition” in an overture that marks a shift in US policy. Mr Trump has previously said Mr Tillerson was “wasting his time” trying to talk to North Korea.

In an address in Washington, Mr Tillerson said the United States was “ready to talk anytime North Korea would like to talk”.

“We are ready to have the first meeting without precondition,” he said. “Let’s just meet, and we can talk about the weather if you want. Talk about whether it’s going to be a square table or a round table, if that’s what you are excited about. But can we at least sit down and see each other face-to-face, and then we can begin to lay out a map, a road map of what we might be willing to work towards.”

On Wednesday, however, a White House official said no negotiations can be held with North Korea until it improves its behaviour, raising questions about Mr Tillerson’s offer.

Mr Tillerson also urged China to do more to contain the North Korean threat, including cutting off oil exports to the country.