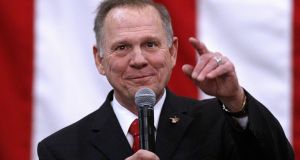 Some Alabama Republicans are ignoring US president Donald Trump’s call to back their own party’s candidate for the senate, Roy Moore, and are instead voting for Democrat Doug Jones. But many others are still backing Mr Moore despite accusations he sexually misconduct made by several underage girls. The race is on a knife edge.

A victory for Mr Moore presents a real headache for the Republicans, with the former chief justice of Alabama likely to face an ethics committee on his arrival to the senate. Suzanne Lynch reports from Washington.

Plus, Environment and Science Editor Kevin O’Sullivan reports on the One Planet climate conference taking place in Paris this week, where France’s president Emmanuel Macron is putting pressure on other nations, including Ireland, to up the ante on tackling global warming.