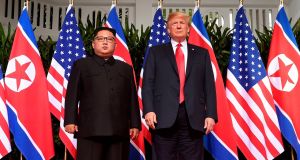 US president Donald Trump has said he expects next week’s summit with North Korean leader Kim Jong-un to be “very successful,” as he raised the prospects of lifting sanctions on the country under certain conditions.

Speaking at the White House on Wednesday, Mr Trump described the relationship between the leaders as “very strong” and predicted that he may meet the North Korean leader again after the summit in Vietnam concludes.

“I think we’ll accomplish a lot. I don’t think this will be the last meeting by any chance,” he said.

The US president said he would like to ease sanctions on North Korea, but he needs to see “meaningful” progress. “We’ll see what happens. The sanctions are on in full. I haven’t taken sanctions off, as you know. I’d love to be able to, but in order to do that, we have to do something that’s meaningful on the other side,” he said.

North Korea pledged to move towards denuclearisation following the first ever meeting between a North Korean leader and a sitting US president last June in Singapore. But despite the cessation of missile test flights, there have been few signs of concrete progress on denuclearising since the meeting.

Nonetheless, Mr Trump said he believes that North Korea is a country with “tremendous potential for economic wellbeing” in the long term. “I think he understands that very well,” he says of the country’s leader.

Mr Trump is due to leave Washington next Monday for the two-day summit amid speculation that special counsel Robert Mueller’s report into Russian interference in the 2016 presidential election could be completed as early as next week. CNN reported that the report is nearing completion, though it is not yet clear if the report will be published in full.

Asked by reporters if he expected the report, Mr Trump said it was a question for the new attorney general William Barr, whom he described as a “tremendous man and a tremendous person who really respects this country and the justice department”.

Mr Trump also hit out at Andrew McCabe, the former deputy director of the FBI, who said in media interviews promoting his new book that he believed Mr Trump could be a Russian agent and has criticised the president for undermining law enforcement officials.

Labelling Mr McCabe a “disgrace,” the president called him “a poor man’s J Edgar Hoover”, a reference to the first director of the FBI.

Separately, Mr Trump called on California to “send back” billions of dollars in government money that was ring-fenced for a rail project in the state. “Record cost overruns,” he said in a Wednesday morning tweet, claiming that the project has been scaled back so that the fast train project no longer goes from Los Angelus to San Francisco. “Send the Federal Government back the Billions of Dollars WASTED!”

But his comments prompted accusations from California’s governor that the president was punishing the state over its move to bring a lawsuit – together with 15 other states – against the president’s decision to declare a national emergency over immigration to source funding for his border wall.

Democratic governor Gavin Newsom denounced Mr Trump’s move as “political retribution” for the lawsuit which was filed in the Federal District Court in San Francisco on Monday. The suit argues that Mr Trump does not have the power to divert funds for use for the wall as Congress controls spending, accusing the president of using the pretext of a “manufactured crisis of unlawful immigration”.

“Contrary to the will of Congress, the president has used the pretext of a manufactured ‘crisis’ of unlawful immigration to declare a national emergency and redirect federal dollars appropriated for drug interdiction, military construction and law enforcement initiatives toward building a wall on the United States-Mexico border,” the suit states.

Mr Trump said he expected to do “very well with the lawsuit”, calling it an “open and shut case”.