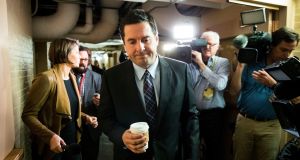 Chairman of the House Intelligence Committee Devin Nunes walks past reporters on Capitol Hill in Washington. Republicans on the committee have voted to release a contentious secret memorandum said to accuse the FBI of misusing their authority. Photograph: New York Times

Tensions between Republicans and US intelligence agencies deepened last night after the House Intelligence Committee voted to release a memo detailing what they believe are flaws in the US intelligence community’s approach to the Russia investigation.

The House Intelligence Committee – one of the congressional committees investigating alleged Russian interference in the 2016 election – on Monday evening voted to release a controversial memo compiled by Republicans.

The memo reportedly claims deputy attorney general Rod Rosenstein failed to adequately explain in his application to a federal judge why he wanted to extend FBI surveillance of Carter Page, a former advisor to the Trump campaign.

In particular, Republicans believe the Department of Justice did not make clear that the information used to justify increased surveillance of Mr Page was based in part on a discredited dossier compiled by consultancy Fusion GPS which was originally financed by Democrats.

Mr Trump, who received a copy of the top-secret document after the vote on Monday evening, now has five days to decide whether to release it publicly.

He has previously called for its content to be released, as have several Trump allies, with the online campaign #releasethememo gaining traction in recent weeks.

Democrats said that Republicans had also opened an investigation into the FBI and the Department of Justice.

Republicans on the committee also voted against releasing a Democratic memo – essentially rebutting the contents of the Republican-drafted document.

Adam Schiff, the top Democratic in the committee, described the development as a “sad day” for the committee and accused Republicans of politicising the intelligence services.

“Sadly, we expect that the president of the United States will not put the national interest over his own personal interest,” said Mr Schiff. “But it is a sad day indeed when that is also true of our own committee.”

The controversy over the disputed memo is the latest manifestation of a growing campaign among some Republicans and the Trump administration to discredit the Russia investigation.

Earlier on Monday, Andrew McCabe, the deputy director of the FBI resigned months earlier than had been expected. White House press secretary said the president had nothing to do with the decision, but President Trump has consistently singled out Mr McCabe, accusing him of a pro-Clinton bias.

In particular he has questioned Mr McCabe’s impartiality in the investigation of last year’s handling by the FBI of the Hillary Clinton email scandal. Ms Mc Cabe’s wife contested Virginia state elections as a Democrat, receiving hundreds of thousands of dollars in funding from a democratic funder with close links to Hillary Clinton. Mr Trump has seized on this political connection to Democrats, arguing that it points to a bias within the FBI.

It has been reported Mr McCabe’s abrupt departure may be connected to a forthcoming report by the Inspector General into the handling of the Hillary Clinton email scandal by the FBI.

Then director James Comey took the unusual step of announcing, in the final weeks of the presidential campaign, that he was reopening an investigation into Ms Clinton’s use of an email server while she was secretary of state, a move Mrs Clinton credited as one of the reasons she lost the election to Mr Trump.

The White House indicated last night that no decision is likely to be made by the president before his State of the Union speech to Congress on Tuesday night.