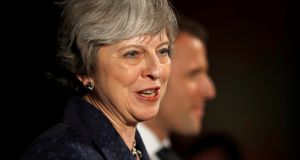 The European Union’s proposals for a transitional period after Brexit contained few surprises and Britain’s official response was moderate and predictable. Even where they disagree, as on Britain’s wish for a “right to object” to new EU rules, the distance between the two sides is relatively modest.

British officials acknowledge that London cannot continue to shape EU policy after Brexit but they hope to expand and beef up the consultative processes the EU guidelines promise “on a case-by-case basis”. Besides, as David Davis told a House of Lords committee on Monday, with a new European Parliament and European Commission taking office a few months after Brexit, there are unlikely to be very many new rules before the transition is over.

Remainers have long lamented the lack of direction at the top of the government, a complaint now voiced by the Brexiteers and the centrist mainstream in the party

While Davis was making soothing noises to the peers, however, Conservative Brexiteers were raising hell over the transition in the Commons. They were taking their cue from Jacob Rees-Mogg, the new chairman of the European Research Group, a 60-strong hardline Brexiteer caucus of Conservative backbenchers. Rees-Mogg, whose two predecessors as the Brexiteers’ shop steward were low-profile figures who have been promoted to ministerial office, argues the EU’s transition deal would reduce Britain to the status of a “vassal state”.

Until now, the Brexiteers have backed Theresa May in her determination to remain prime minister, as they calculated she was best-placed to push through Britain’s departure from the EU. From the beginning, she has bent in their direction, pinning her colours to a hard Brexit in her Lancaster House speech a year ago, when she promised that Britain would leave the single market, the customs union and the European Court of Justice (ECJ).

After last year’s botched election, the prime minister’s weakness was a boon to the Brexiteers, who left her in no doubt that her fate was in their hands. If May is too weak to stand up to the hardliners or to sack a mutinous Boris Johnson, however, she also lacks the authority to get rid of her chancellor, Philip Hammond, the Brexiteers’ bête noir.

Remainers have long lamented the lack of direction at the top of the government, a complaint now voiced by the Brexiteers and the centrist mainstream in the party. The latter group includes a number of ambitious MPs elected in 2010 and 2015 who were disappointed when May ignored them in her recent reshuffle.

Forty-eight MPs must write to the 1922 committee of backbenchers to trigger a confidence vote in the prime minister and Westminster is alive with rumours that the letters are piling up. May could expect to win a confidence vote but a substantial minority voting against her would rob her of the last vestige of authority she now clings to.