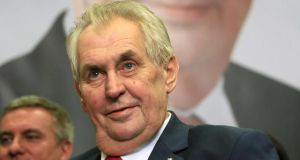 Controversial Czech president Milos Zeman has struck a somewhat conciliatory note after winning re-election, but immediately faced calls to condemn members of his entourage for roughing up reporters at his victory celebrations.

Mr Zeman took 51.4 per cent of votes in a run-off held on Friday and Saturday to secure a second term ahead of challenger Jiri Drahos on 48.6 per cent.

The incumbent campaigned on an anti-immigration and Eurosceptic agenda, and portrayed his rival as a wishy-washy liberal who could not be trusted to keep out refugees whom Mr Zeman describes as a major security risk to Europe.

Prof Drahos, a chemical engineer and former head of the Czech academy of sciences, pledged to boost co-operation with the EU and end the negative, often aggressive and pro-Russian tone that is characteristic of Mr Zeman’s tenure in Prague Castle.

While Prof Drahos (68) fared well in Prague and other major cities, Mr Zeman dominated in the regions, where his criticism of the elite, rejection of political correctness and status as a proud drinker and smoker are all vote-winners.

“I would like to be a bit humbler, less self-confident and somewhat more accommodating toward people whose views are different from mine; to be less arrogant, although I’ll continue to think they’re no good.” Mr Zeman told supporters after securing another five-year term.

At the same time, however, footage was emerging of members of Mr Zeman’s entourage punching and pushing reporters in the Prague hotel where he was holding his celebrations.

Mr Zeman is known for his hostility towards critical media, joking with Russian president Vladimir Putin that some reporters should be “liquidated” and brandishing a fake rifle emblazoned with the words “for journalists”.

“We strongly condemn the attacks against several journalists as President Zeman’s re-election victory was being announced,” said Pauline Ades-Mevel, the head of the EU-Balkans desk at press freedom group Reporters Without Borders.

“It is unacceptable that the supporters of a political leader of this level physically assaulted journalists who were just doing their job, which is to report the news. Such behaviour is unworthy of a democracy, and the Zeman camp must publicly condemn this violence.”

Prof Drahos put a brave face on his defeat after a campaign in which he was subjected to fake news and social media attacks claiming – without any evidence – that he was a paedophile, a communist-era collaborator and an advocate of uncontrolled mass immigration.

“We did not win, but we didn’t lose either. I am terribly happy for this huge wave of energy,” Mr Drahos told supporters. “I am convinced this energy will not disappear.”

“Zeman came across as more savvy and Drahos didn’t look like an experienced politician,” Mr Pehe said. “The result shows that half of Czech society is pretty much afraid of the outside world and challenges associated with globalisation and immigration, and they see Zeman as someone who speaks for them and will protect them.”

The anti-immigration, Eurosceptic billionaire lost a parliamentary vote of confidence and his government resigned last week, but Mr Zeman pledged to give him another chance to secure majority backing.

However, Mr Babis faces prosecution for alleged fraud, placing him and his prime ministerial ambitions in a precarious position that Mr Zeman could use to secure a key role in future government decision-making.