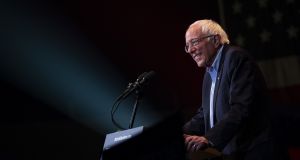 On this bright weekend morning, her cafe has been transformed into one of the many impromptu campaign locations in the region ahead of Monday’s Iowa caucus. Ilhan Omar and Pramila Jayapal – two of the most high-profile female members of Congress elected in the 2018 midterm elections – are due here shortly to campaign for Bernie Sanders, the Vermont senator currently leading the polls in the state for the Democratic nomination for the presidential election.

Ed Fallon and his partner Kathy Byrnes have popped in to meet someone, unaware that the cafe is hosting a Bernie Sanders campaign event shortly. “Best coffee in town,” says Ed, who lives in Des Moines. His grandparents emigrated from Roscommon in the 1920s, he tells me, and his family still has a farm there. Ed and Kathy, who runs an “urban farm” at home, are organising a climate march later in the city.

Both see climate change as the single most important issue in this election. As a result, Ed is caucusing for Tom Steyer, the billionaire Democrat who has put climate action at the top of his agenda. His second vote will go to Bernie Sanders – potentially a more important choice given that Steyer may not reach the 15 per cent threshold needed to secure delegates. Fallon also voted for Sanders in the 2016 Iowa caucus. “Well that was an easy choice – over Hillary,” he says. “This year we’ve a bunch of good candidates, particularly on the progressive side.”

Brothers Jack and Mark Tangel from Illinois have come to Iowa for the weekend to campaign for Sanders. It’s 19-year-old Mark’s first time to vote. His older brother says he supported Sanders in the primaries last time around. This time is different, however. “I voted last time, but I just wasn’t as active,” he explains.

“I think the last three years of the current administration has deeply politicised many people. I’m one of those people. For me it’s very simple: we need to get the money out of politics here in the US in order that the policies put in place represent the majority of Americans. Bernie Sanders is the only candidate willing to do that,” he says, stating that Elizabeth Warren had committed to taking big money in the general election.

As we await the arrival of the Sanders surrogates, a man sitting beside me from the Alde political group in the European Parliament who has travelled to Iowa for the caucus is busy trying to explain the intricacies of the EU electoral system to Ellen, a Bernie supporter. Shortly before 10am Omar and Jayapal enter the bustling cafe and take to the makeshift stage. The microphone doesn’t work, but Jayapal, one of the few Hindu Americans in Congress and the chairwoman of the congressional progressive caucus, doesn’t care.

“We are counting on you. What happens in Iowa doesn’t just stay in Iowa,” she declares, urging Iowans to dispel the “myth of the likely voter” and back Sanders.

Describing the Vermont senator as a “prophetic voice who can speak truth about the injustices of the system as it is, the inequality that exists in our country”, she says that Sanders is the candidate who can create the “revolutionary change” needed in the country.

Omar, who shot to fame as one of the four members of the “squad” singled out last year by president Donald Trump for being unAmerican, opens her speech by describing her expectations of the US when she moved here from Africa with her family as a teenager. Describing how the orientation videos shown to refugees depicted an America filled with “beautiful children, boarding beautiful buses to their beautiful schools”, she said the real America was very different. Since then, she says, her mission has been to make sure all citizens have access to an “exceptional” country.

This year, the presence of so-called “surrogates” – high-profile supporters from out of town who are campaigning for candidates in the run-up to the Iowa caucus – is playing an outsized role in the campaign. Four of the Democratic candidates have been required to stay in Washington for the Senate impeachment trial, increasing their dependence on surrogates to make the case to the people of Iowa.

In addition to Omar and Prayapal, left-wing superstar Alexandria Ocasio-Cortez was here last weekend campaigning for Sanders – a huge boost for the veteran socialist senator who is hoping to capture the energy on the left wing of the party and clinch the presidential nomination this time around, having narrowly lost the Iowa caucus to Hillary Clinton in 2016. Activist and film-maker Michael Moore is also volunteering for Sanders in the state, while musicians Bon Iver and Vampire Weekend held pro-Bernie concerts here this weekend in some of the best-attended events of the campaign trail.

But it’s not just Sanders who is putting in the groundwork in Iowa, a state where face-to-face campaigning is vital ever since Iowa solidified its status as the first-in-the-nation caucus in the 1970s.

With the Senate impeachment trial adjourned for the weekend, all of the candidates have been criss-crossing the state in the final sprint before Monday’s caucus.

Two hours east from Des Moines, across the snowy corn fields of Iowa, hundreds of people have gathered for a Joe Biden rally at a school in Cedar Rapids.

Like Sanders, Biden’s campaign has drafted in some heavy hitters. Former secretary of state John Kerry, well-known Democratic senator Chris Coons and recently elected congresswoman Abby Finkenauer have all cramped in to the school gym which has been transformed into a site of political theatre for a few hours.

As the crowd waits for Biden’s arrival, the room serves as a reminder that one of the most important electoral processes in the world begins in everyday spaces such as this. From the hopscotch grid taped down on the floor to the stopped clock over the basketball hoop, this could be any school in the US.

As Biden finally arrives following a warm-up speech by the president of the firefighters’ union, the crowd erupts. Many are holding “Ridin’ with Biden” or “Firefighters for Joe” signs.

The former vice-president, who has disappointed on the debate stage since announcing his candidacy last April, performs better in front of smaller crowds.  The retail politics demanded by the primary campaign is his natural milieu.

Much of his speech focuses on Donald Trump. “This year I believe character is on the ballot,” he says as he leaves the podium and walks among the crowd. “America’s soul is being besmirched.”

He also highlights his policy priorities during the speech, pledging action on gun reform and climate change, and highlighting his role in introducing the Affordable Care Act during the Obama administration.

Biden’s speech – his second event of the day – seems to connect with those present. But not all attendees are die-hard Joe Biden fans. Democrat Laurie is visiting her sister Julie who lives in the state. Though she will not be caucusing on Monday, she will be voting later this year in Hawaii, where she lives.

“What we’re doing between now and Monday is trying to see as many candidates as we can. We are not committed to anyone just yet,” she says.

Like for many Democratic voters, she says, the choice is difficult. “Beating Trump is my number one priority. I really feel strongly about climate change and healthcare, but I’m kind of torn. Do I want the candidate who is really going to delve in to climate change and healthcare, or somebody who can beat Trump? A lot of Democrats feel that way I think – they’re balancing between one or the other.”

Julie nods in agreement. “I change my mind daily,” she smiles, noting that they are attending an Elizabeth Warren rally after the Biden event.

With the polls showing one of the tightest races in decades, the situation is extremely fluid going into Monday’s caucus. The uncertain picture was underlined by the decision of the Des Moines Register and CNN not to release their much anticipated final poll on Saturday night following complaints from Pete Buttigieg’s team about the process used. As Democrats begin their months-long process of selecting a candidate for November’s election, the ultimate winner is anyone’s guess. For those canvassing in Iowa this weekend, securing every last vote was essential.