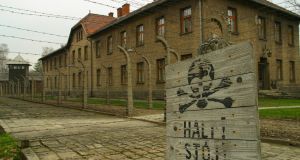 Electric fence at Auschwitz concentration camp: A recent survey found one in five Germans thinks memorialising the Nazi crimes occupies too great a place compared to other issues.

Germany’s concentration camp memorials have warned of a rise in visitors questioning the historical legitimacy of Holocaust remembrance and praising Nazi policies.

Directors of memorials in former camps say tours are now frequently disrupted by neo-Nazis and other visitors who question the historical facts as presented by guides.

“Increasingly we find messages in the guest book, claiming that Nazism and the concentration camps were sensible and good for the Germans,” said Volkhard Knigge, director of the museum at the former Buchenwald camp, near Weimar, in eastern Germany.

Visitors now take selfies anywhere they like, he said, even on mass graves. Swastika graffiti, once only found on the fringes of the camp, was now turning up all over. In recent months he has noticed growing numbers of tour disturbances, requiring additional training for his staff.

“We don’t have a group of neo-Nazis or indoctrinated school classes here every day, but there is a qualitative change, a radicalisation in the attitude,” he said. “Respect for the place and for the victims is vanishing.”

The phenomenon of camp memorial visitors challenging – or even denying – the Holocaust first made headlines two years ago. A group visiting the Sachsenhausen memorial – in a tour organised by far-right leader Alice Weidel, of the far-right Alternative für Deutschland (AfD) party – was thrown out after disparaging remarks were made.

Memorial spokesman Horst Seferens said the AfD tour guests “created a massive disturbance” and repeatedly challenged the guide with questions like “can you prove that?”

“The guide accompanied the group to the gate,” the spokesman said, ending the tour for the AfD guests but also 20 other non-related visitors.

The Dachau camp memorial, outside Munich, says it “occasionally” has people among its 900,000 annual visitors who try to disrupt tours, but that no records are kept.

For anti-Semitism researchers, the phenomenon reflects growing hate speech and Holocaust denial that has established and normalised itself unchecked in online media.

“The hate that spreads through the social networks is now crashing into reality with concentration camp memorial visits,” said Juliane Wetzel, from Berlin’s Centre for Anti-Semitism Research, to the DPA news agency.

Other analysts link the phenomenon to efforts of the AfD party to chip away at Germany’s decades-old Holocaust memorial culture. In June 2018, AfD co-leader Alexander Gauland relativised Hitler and the Nazis as “bird shit in over 1,000 years of successful German history”.

After his remarks provoked uproar, he conceded they “could be misinterpreted and were not smart”. But the party’s pattern of provocation and retraction continued when another leading AfD figure described the memorial in central Berlin for Europe’s murdered Jews as a “disgrace”.

A recent survey found that one in five Germans now thinks memorialising the Nazi crimes occupies too great a place compared to other issues. This unhappiness rose to 56 per cent among AfD voters.

Faced with a rising challenge, Buchenwald memorial director Volkhard Knigge has called for greater co-operation among memorials. For now he fears that “something is breaking away in terms of historical awareness, human sensitivity and democratic and political orientation”.