Turkish soldiers killed in Syria as battle for Idlib escalates 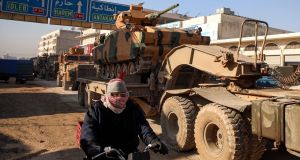 A Turkish military convoy passes through the town of Dana, east of the Turkish-Syrian border in Idlib province on Sunday. Photograph: Aaref Watad/AFP via Getty Images

Turkish ground and air forces on Monday targeted Syrian army positions after a large Turkish military convoy was hit by Syrian fire while en route to the strategic town of Saraqeb in northwestern Idlib province. Five Turkish soldiers and one civilian were killed and nine wounded.

Turkish president Recep Tayyip Erdogan, who seeks the fall of the Syrian government, said that 46 Syrian targets had been hit. “We cannot sit on our hands,” he said. “In response, we will hold to account all those responsible for the attack on the Turkish soldiers.”

Erdogan warned Russia, which supports the Syrian government, not to “stand in our way”, and claimed that more than 30 Syrian troops had been killed. The Britain-based Syrian Observatory for Human Rights reported six Syrian fatalities.

The exchange took place after Turkey’s convoy moved towards Saraqeb in al-Qaeda-controlled Idlib on Sunday with the object of reinforcing Ankara’s deployment of troops and tanks around the town, which straddles the Damascus-Hama-Aleppo highway.

By taking such action, Turkey has prevented the Syrian army from entering Saraqeb following the army’s capture of Maaret al-Nuaman, 20km to the south. Regaining the highway is the objective of the Syrian army offensive which was launched in December with full Russian air support.

Located 53km southeast of Aleppo city on the north-south highway, Saraqeb also sits on the junction of the east-west highway leading to the port city of Latakia.

To counter the Syrian army’s Saraqeb offensive, Turkey’s surrogate Syrian National Army launched a diversionary advance toward Aleppo. Russia responded with air strikes on the town of al-Bab in the Turkish-controlled triangle of Syrian territory, signalling that Moscow would not permit pro-Turkish forces to threaten Aleppo city.

Turkey’s intervention in the flashpoint Saraqeb area risks clashes between Turkish and Russian forces, although both are meant to be guarantors of a 2018 deal for a truce and de-confliction process in Idlib. Under this agreement, Turkey was responsible for monitoring an Idlib ceasefire, disarming jihadi factions, clearing heavy weapons and jihadis from a buffer zone surrounding the province, and opening both the Damascus-Aleppo and Saraqeb-Latakia highways.

Turkey’s failure to meet these commitments and its establishment of 12 substantial military bases in Idlib have angered and alienated Russia, prompting Moscow to provide full backing to the Syrian army’s ongoing offensive.

Erdogan has, ironically, accused Russia of abandoning the deal and threatened the use of military force to protect Turkey’s interests. Neither side appears prepared to maintain even the pretence of favouring a ceasefire. Turkey has also consulted with the US military with the aim of preventing the Syrian army from attaining its ultimate objective of regaining Idlib.

This would prolong the conflict and put at risk three million civilians living in Idlib. Some 700,000 have massed on the northern provincial border where they are refused entry to Turkey, which hosts 3.5 million Syrian refugees.

The rift between Russia and Turkey has deepened since Turkey dispatched 2,600 Syrian mercenaries to Libya to support the United Nations-recognised government in Tripoli against rebel General Khalifa Haftar, who is supported by Russia, the UAE, Egypt, Jordan, and France.