Palestinians count dead after day of carnage on Gaza border 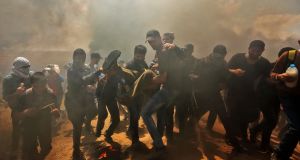 Palestinians carry a demonstrator injured during clashes with Israeli forces near the border between the Gaza Strip and Israel, east of Gaza City, on Monday. Scores were killed. Photograph: Mahmud Hams/AFP/Getty Images

Palestinians were counting their dead tonight after Israeli forces opened fire on protesters on the Gaza border, killing at least 58 and leaving some 2,700 wounded, many from tear gas inhalation.

The violence took place against the backdrop of the much-anticipated opening of the US embassy in Jerusalem, where dignitaries listened to a video message from US president Donald Trump as news filtered through of a quickly rising death toll less than 100km away.

The unfolding events were depressingly predictable: the protest and the response had been meticulously planned for weeks in advance by the Hamas leaders in Gaza, with Israel upping the ante and making clear there would be no breach of the border, come what may.

As evening fell it was clear that Monday was the bloodiest day since the end of the 2014 Gaza war.

The March of Return protests began six weeks ago and had already left 48 protesters dead before the “Day of Rage” protests to coincide with the transfer of the US embassy from Tel Aviv to Jerusalem on Monday, and planned for Tuesday to mark the “Nakba”, or catastrophe day. This is the 70th anniversary of the establishment of the state of Israel and the mass exodus of Palestinian refugees – more than a million of whom live in the impoverished coastal enclave.

Some 40,000 Palestinians participated in Monday’s protests at 12 locations along the border. The day began with protesters burning tyres and throwing stones, but as the crowds swelled there were a number of attempts to break across the border, prompting fire from Israeli snipers.

The Israeli military said it killed three people as they tried to plant a bomb on the fence in the southern Gaza Strip. Israeli jets and tanks also hit Hamas targets in northern Gaza after Israeli troops were fired on.

The Palestinian Authority (PA) in Ramallah accused Israel of committing a “horrible massacre”, and declared a national day of mourning and a general strike on Tuesday across the West Bank and Gaza.

The PA called for “immediate and urgent international intervention to stop the massacre committed by Israel”.

Israeli prime minister Binyamin Netanyahu said every country had the right to protect its borders. “The Hamas terrorist organisation declares its intentions to destroy Israel and sends thousands to break through the border fence for that purpose,” he said. “We will continue to act with determination to defend our sovereignty and our citizens.”

Jared Kushner, Mr Trump’s son-in-law, noted at the embassy ceremony in his speech that moving the embassy to the south Jerusalem neighbourhood of Arnona meant Mr Trump had fulfilled an election campaign promise.

In his video message, Mr Trump said the opening of the embassy in Jerusalem had been a long time coming.

“Israel is a sovereign nation with the right like every other sovereign nation to determine its own capital. Yet, for many years, we failed to acknowledge the obvious. The plain reality that Jerusalem is Israel’s capital.”

Human rights groups criticised Israel for using live fire when soldiers’ lives were not in danger and showing an “appalling indifference to human life”.

Minister for Foreign Affairs Simon Coveney said Ireland would not be moving its embassy to Jerusalem “unless and until there is a comprehensive agreement on a broader peace process”.

He told RTÉ’s News at One that he thought it was “unwise” for the US to recognise Jerusalem as the capital of Israel at this time.

“It is also unwise to move the US embassy to Jerusalem,” he said, because it was “inflaming an already very tense situation and relationship between Palestinians and Israelis”.

The Cabinet is likely to discuss the situation in Gaza and Jerusalem when it meets at Government Buildings on Tuesday morning. Independent Alliance Minister Finian McGrath has said he would raise the issue with Mr Coveney, and Ministers are likely to discuss the option of calling in the Israeli ambassador.

Independent junior Minister John Halligan has already said the Government should call in the ambassador “to express its abhorrence at the current violence in the Middle East”.

The protests will continue on Tuesday with Nakba Day, and on Friday, the first weekend of the Ramadan holy month, and Hamas intends to extend the demonstrations into June.