Gaza border protests which left dozens of Palestinians dead showed "those provoking violence are part of the problem", said Jared Kushner, President Donald Trump's son-in-law and his senior adviser at the opening of the U.S. embassy in Jerusalem. 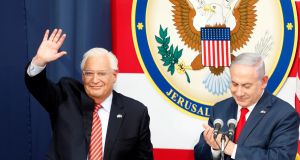 US ambassador to Israel David Friedman and Israeli prime minister Binyamin Netanyahu: embassy move has been condemned by Palestinians who claim East Jerusalem as the capital of a future state. It has prompted worldwide protests and has met widespread international criticism. Photograph: Abir Sultan

Less than a week after he withdrew from the Iran nuclear deal, US president Donald Trump ignited political chaos in the Middle East as Gaza erupted into violence.

The decision to relocate the US Israeli embassy from Tel Aviv to Jerusalem, flagged last autumn, marked the US president’s latest break with the international community on a key foreign policy issue.

But the violence that was spurred on Monday by the move has exposed the political naivety and lack of strategic vision that appears to characterise Trump’s foreign policy instincts.

As Trump’s daughter Ivanka and her husband Jared Kushner sat smiling beside the Netanyahus, the chaos that erupted 100km south marked the worst day of violence in the region for years.

The blame for Monday’s symbolic but hugely provocative move to relocate the embassy lies primarily at the feet of Kushner, the president’s son-in-law. The 37-year-old businessman, who had no political experience before his appointment as Trump’s special adviser over a year ago, was given the Middle East brief when he joined the White House.

The family are practising Jews – Ivanka converted to Judaism before their marriage – and close friends of Israel, leading to questions about Kushner’s role as an honest broker in the process, even as some officials were pleasantly surprised at his ability and intelligence.

Kushner has also continued to focus on America’s Middle East policy and retains a desk in the West Wing despite losing his top-level security clearance earlier this year.

As attendees at the ceremony cheered Trump, Kushner appeared to reference the violence unfolding nearby. “As we have seen from the protests of the last month and even today, those provoking violence are part of the problem and not part of the solution,” he said. Back in Washington, the White House communication team seemed to be on message.

Despite repeated opportunities to criticise the Israeli actions during the daily press briefing, deputy White House press secretary Raj Shah refused to condemn the Israeli actions. “We believe Hamas is responsible for these tragic deaths,” he said. “Their rather cynical exploitation of the situation is what’s leading to these deaths and we want it stopped.”

Much will depend in the coming days on the Republican response to the events in the Middle East, and whether the Republican leadership in Congress will condemn the Israeli moves. It seems unlikely.

America and Israel’s connection has been cemented under Trump’s presidency. As treasury secretary Steve Mnuchin said on the eve of the opening of the embassy in Jerusalem, “The US has no greater partner than Israel – nothing is more important.”

Israeli leader Binyamin Netanyahu, under pressure domestically in recent months over corruption allegations, can congratulate himself on presiding over a new dawn in Israeli-American relations.

Even last week Trump cited Israel’s announcement of alleged new intelligence information on Iran, rather than evidence from his own security officials, as he explained to the nation his decision to withdraw from the nuclear deal. But the latest developments also reflect a strengthening US-Saudi relationship.

Part of Kushner’s calculation is that the conversation is shifting among Arab states about the Israeli-Palestinian issue, and that Arab countries in the region are increasingly motivated by their concerns about Iran rather than a desire for a Palestinian state.

There is a belief in Washington that this change in direction – and apparent thaw in relations between Tel Aviv and Riyadh – could kick-start the moribund Middle East process. But after Monday’s events, any hope of a diplomatic solution to the conflict in the region seems as distant as ever.