Many among 40,000 protesters knew day would end with death 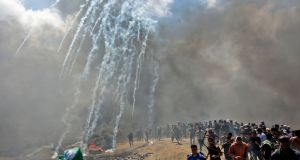 Palestinians run for cover from tear gas fired by Israeli forces near the border between the Gaza strip and Israel east of Gaza City, on Monday. Photograph: Mahmud Hams/AFP/Getty Images

Amid the wail of sirens and the urgent to and fro of ambulances from the front line, Gaza’s hospitals struggled on Monday to cope with the influx of dead and wounded after Israeli forces opened fire on Palestinian protesters.

Witnesses described morgues filling up and a sense of panic as hundreds of relatives converged on hospitals seeking news.

Among the 40,000 Palestinians who flocked to Gaza’s border fence, it was clear to many that the day would end with death.

“Today is the big day when we will cross the fence and tell Israel and the world we will not accept being occupied for ever,” said Ali, a science teacher who declined to give his last name. “Many may get martyred today, so many, but the world will hear our message: occupation must end.”

But after weeks of similar protests in which at least 40 Palestinians have died, the violence at Monday’s “Great March of Return” – coinciding with the controversial ceremony in Jerusalem to mark the relocation of the US embassy – was shocking even by the standards of the recent demonstrations.

Within the space of a few hours, 55 Palestinians were killed by Israeli fire, including five minors, in the single most deadly day in Gaza since the end of the last war in 2014.

In line with previous protests in recent weeks that have resulted in dozens of Palestinian fatalities, there were no reports of any dead or injured on the Israeli side.

It was soon clear that repeated calls on Israel to show restraint were being swept away by volleys of tear gas and live bullets, with most of the casualties concentrated in the southern Gaza towns of Khan Younis and Rafah.

The violence began as it would continue. In one area, about 150 metres from the border fence, reporters watched two men who tried to advance towards the border fence being shot in the legs by Israeli troops. Scores more were hit in the upper body, according to health workers.

Included among the Palestinian fatalities were three men the Israeli military said it had killed as they tried to place an explosive device near the border fence; 14-year-old Az-Adin Asamak; a medic; and a man in a wheelchair who had been pictured on social media using a slingshot, while Al Jazeera television said one of its reporters had been injured by Israeli live fire.

Israeli jets launched air strikes against five Hamas outposts and Israel said it was preparing for the risk of retaliatory rocket fire from Hamas in Gaza.

Many of those drawn to the protests spoke of mounting desperation in Gaza where Israel’s blockade has devastated the economy, leaving unemployment for under-25s at more than 60 per cent.

“I’m here because we want our land returned. We have nothing to lose,” said Mohammad Nabieh (25), who had been burning tyres to provide cover for the protesters.

Nabieh said he was the descendant of refugees from a village near the Israeli city of Ashdod but had never been able to visit the place his family came from. “Nobody cares about us, so why to wait to die slowly. The blockade put us in a big cage – we have to get out. I’m 25 and have almost no work. What am I supposed to do? Rely on aid?”

Said Gherbawi (28), who was black with soot, had also been burning tyres. “I have no work. This is my work now. We have to keep Israelis bothered by the smoke. I don’t know any better way than this. We have to fight,” he said.

Ismail Radwan, a senior Hamas figure, said the mass border protests against Israel would continue “until the rights of the Palestinian people are achieved”.

Israeli troops had been reinforced along the border before the protests that coincided with Palestinians marking Nakba – or “catastrophe” – day, the annual commemoration of the displacement of Palestinians during the foundation of Israel in 1948.

Israeli planes dropped leaflets warning Palestinians not to approach the fence, while amateur Israeli drone racers were recruited to bring down “incendiary kites” launched over the fence.

“Even if the fence is breached,” warned Israeli military spokesman Jonathan Conricus in advance, “we will be able to protect Israeli civilians from attempts to massacre or kidnap or kill them.” – Guardian