Some 100 singing demonstrators block thoroughfare in front of Trump hotel 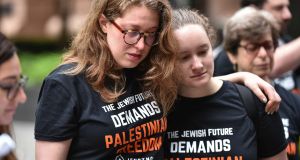 Demonstrators mourn the deaths of Palestinian demonstrators as they rally before marching to the Trump International Hotel in Washington, DC. Photograph: Mandel Ngan/AFP/Getty Images

Dozens of chanting, singing Jewish demonstrators blocked a major Washington thoroughfare on Monday to denounce President Donald Trump’s order moving the US embassy to Jerusalem and Israel’s killing of Palestinian protesters on the Gaza border.

Chanting “Stop the violence”, about 100 protesters from the IfNotNow movement blocked Pennsylvania Avenue, which links the White House and the white-domed Capitol, for about two hours in front of the Trump International Hotel.

“The shelter of peace must extend to Palestinians as well,” Sarah Brammer-Shlay (26) a rabbinical student from Philadelphia and a protest organiser, told the demonstrators.

Protesters, many wearing skullcaps and black T-shirts stating that “the Jewish future demands Palestinian freedom”, sang “We will build this world with love.” They also carried mock building parts and directional signs for an “Embassy of Freedom” to replace what they called the “Embassy of Occupation” in Jerusalem.

Speakers repeatedly updated the crowd on the death toll from the Gaza border, where at least several dozen people among the thousands protesting the opening of the US embassy in Jerusalem were killed by Israeli troops.

The Washington protest was the second against the Gaza violence by IfNotNow, which urges US Jewish groups to end their support of Israel’s policies toward the occupied West Bank and the Gaza Strip.

Thirty-seven IfNotNow protesters were arrested in six cities last month, including at the offices of US senators Dianne Feinstein of California and Ben Cardin of Maryland, the group said.

“Our question is, ‘Which side are you on?’” spokesman Yonah Lieberman said by phone, adding that the group would not be lobbying congress about the embassy move. “We’re trying to move the megapublic,” Mr Lieberman added. “We don’t believe the people on Capitol Hill are the ones that will transform the Jewish community.”

Mr Lieberman and Brammer-Shlay cited a 2017 poll by the American Jewish Committee advocacy group that showed 80 per cent of US Jews surveyed were against the embassy move, or favoured it at a later date in conjunction with Israeli-Palestinian peace talks.