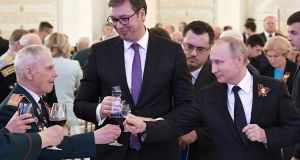 Serbia’s president Aleksandar Vucic has sought Moscow’s continued support over Kosovo and restated his opposition to Nato membership, as he became the first foreign leader to meet Vladimir Putin since he began another term as Russian president.

The Serbian leader paid his latest visit to Moscow after meeting on Monday with Turkish president Recep Tayyip Erdogan in Ankara, as the EU, Russia, Turkey, China and the US all jostle for influence in the Balkans.

Moscow is Belgrade’s staunchest ally in rejecting the independence of Kosovo, a former region of Serbia, and Mr Vucic said he asked Russia, “as one of the most important and strongest world powers, for help in resolving the Kosovo question”.

The EU says Serbia and Kosovo must normalise their relations before they join the bloc, and it is brokering talks to help them reach a deal.

“No solution [on Kosovo] can be found in the United Nations without Russia’s approval and in that sense Russia will very actively monitor our talks and everything that could happen, and will react in a timely way,” Serbia’s leader said.

Mr Vucic wants his country to join the EU – a move that Brussels claims could be possible by 2025 – but he rejects Nato membership, at a time when all of Serbia’s neighbours are either part of the alliance or aiming for accession.

He also assured Mr Putin that Belgrade would not join western sanctions imposed on Russia for its aggression against Ukraine, saying: “Serbia has shown that it is a reliable partner for the Russian Federation. In times that were not easy for Russia, Serbia never went against your interests.”

“I would like to thank you again for what you did in 2015, when you literally saved the Serbian people ... from the stigma of genocide,” he said.

“I want to assure you that the Serbian people will never forget what you did. Many times you defended the territorial integrity and sovereignty of Serbia.”