“The response contains bold and ambitious proposals that would have been unthinkable just a few weeks ago,” Portuguese finance minister and Eurogroup president Mário Centeno told reporters 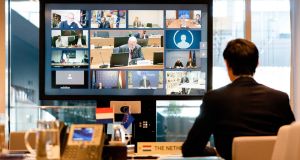 The 19 members of the euro zone hammered out a compromise on Thursday to aid states in need of funding to address the profound economic fallout from the coronavirus pandemic.

The Eurogroup agreed to a package of €500 billion in measures to cushion the blow of a public health emergency that threatens to trigger a debt crisis and a recession of historic scale.

The deal includes the ability of states to borrow from the European Union’s bailout fund, the European Stability Mechanism up to the value of 2 per cent of a state’s GDP or €240 billion.

Funds will also be available from the European Investment Bank, and the so-called SURE fund of the European Commission, which will subsidise wages of workers so that companies can cut working hours of employees rather than sack them.

“The response contains bold and ambitious proposals that would have been unthinkable just a few weeks ago. We can all remember the response to the financial crisis of the last decade, when Europe did too little too late. This time around it’s different,” Portuguese finance minister and Eurogroup president Mário Centeno told reporters.

“We will only come through this test together as Europeans.”

Hopes by nine states including Ireland, Italy, France and Spain that had appealed for joint debt issuance in the form of coronabonds or eurobonds were dashed ahead of the video conference when German Chancellor announced her clear opposition.

“I don’t believe we should have common debt because of the situation of our political union and that’s why we reject this,” Merkel said after speaking to Italian Prime Minister Giuseppe Conte by phone. “But there are so many ways to show solidarity.”

The compromise was reached after France and Germany teamed up to persuade holdouts Italy and the Netherlands to climb down from their entrenched opposite positions.

The Netherlands had insisted that any loans from the ESM bailout funds taken for use other than healthcare should be conditional on reforms to ensure a balanced budget in future.

This was a red line for Italy, where the idea of another bailout with accompanying austerity measures is politically toxic.

“ESM conditionality has been taken off the table,” wrote Italian finance minister Roberto Gualtieri, adding that Italy would continue to lobby for support for eurobonds from other EU states.

The Netherlands called the deal “a powerful and sensible sign of European solidarity”, and said that only health-related ESM loans would be unconditional.

The two positions are conciled by a broad definition of health spending as also including “indirect healthcare, cure and prevention related costs”, which Eurogroup president Centeno said he was confident could amount to the maximum of 2% of GDP or €240 billion allowed under the ESM.

“It took a few hours to agree, but only because this really matters. Very important step forward,” wrote Minister for Finance Paschal Donohoe.