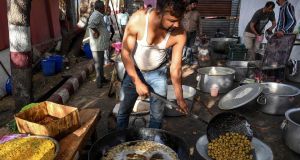 Cooks prepare dinner for migrant labourers at a camp set up by the Indian government in New Delhi. Fear of hunger sparked an exodus by thousands of migrant workers and their families. Photograph: Prakash Singh/AFP via Getty

A lockdown in India aimed at containing the spread of coronavirus could well extend beyond mid-April, raising the spectre of food shortages as the country heads into the annual crop harvesting and sowing seasons.

The measure appears to have been effective. Up to midday on Thursday, India had recorded 5,734 positive Covid-19 cases. The number of fatalities stood at 166, while 472 people had recovered from the infection.

A decision on lengthening the lockdown or imposing it selectively in numerous virus-affected districts will be taken later this week after consultations with medical and other experts, officials said.

If extended it will come at a critical juncture when Indian farmers, especially in northern regions, harvest their wheat and sow monsoon-fed cash crops such as rice, pulses, cotton and sugarcane.

The April to June period is also peak season for picking and planting vegetables and fruits across the country.

The situation with regard to food grain availability across India is not alarming for the next six to eight weeks, federal officials said.

They said India had stockpiles of some 60 million tonnes of grain following years of good harvests, and that this was being distributed to tens of millions of people via the world’s largest state-managed programme.

But they warned that if the lockdown and mass quarantining persisted beyond late April or early May and grain stocks were not replenished by the impending harvest, the country could be faced with food shortages.

Economists and agricultural experts said the principal challenge in regard to the awaiting harvest and timely sowing of the next crops included supporting farmers, share croppers and destitute farm labourers, millions of whom had returned home to their villages after the pandemic erupted.

Over half of India’s 750 million strong workforce is engaged in farming or related activity, and a majority of this number had summarily been laid off without their wages after the lockdown.

Of these, a large number walked home across India over extended distances for days, often without food or hope of any sustenance as the entire countryside too was locked down.

“Presently there are concerns that stopping or postponing harvesting will not only financially cripple millions of farmers and labourers but also adversely impact future food security,” said a federal official, declining to be identified.

The government, he added, faced the stark choice of permitting harvesting and running the risk of wider virus contagion or continuing with the lockdown and losing the harvest and facing starvation, triggering widespread social unrest.

Agriculture contributes some 16 per cent to India’s gross domestic product, and analysts caution that losing the standing crop would also be economically catastrophic.

In late March the federal government had announced a €20 billion relief package to provide food security and cash transfers to the poor, but it has been criticised for being ‘woefully inadequate’.

Many northern agricultural states such as Uttar Pradesh and adjoining Punjab and Haryana have formulated contingency plans to facilitate harvesting, including the deployment of migrant labourers, at present quarantined in makeshift camps, and setting up accessible crop collection centres.