Coronavirus rips through Navajo nation as officials scramble to respond 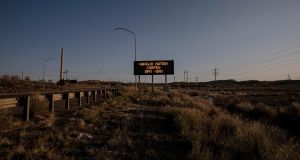 When Chad Yazzie joined the Navajo police department just a few months ago, he expected to issue speeding tickets or break up the occasional fistfight. But coronavirus is now tearing across the largest Indian reservation in the United States.

The Navajo nation’s casualty count is eclipsing that of states with much larger populations, placing the rookie policeman on the front lines. “My job is to tell our people to take this virus seriously or face the consequences,” Yazzie (24) said as he set up a roadblock outside the town of Window Rock to enforce the tribal nation’s new 8pm curfew.

Faced with an alarming spike in deaths from what the tribal health department calls Dikos Ntsaaígíí-19 – or Covid-19 – Navajo officials are putting up checkpoints, assembling field hospitals and threatening curfew violators with 30 days in jail or a $1,000 (€914) fine.

The measures are part of a scramble to protect more than 150,000 people on the vast Navajo reservation, which stretches 70,000sq km across Arizona, New Mexico and Utah, and tens of thousands of others who live in towns bordering the Navajo Nation. As of Wednesday night, the virus had killed 20 people on the reservation, compared with 16 in the entire state of New Mexico, which has a population 13 times larger.

Navajo officials, who have traced the surge in the reservation’s coronavirus cases to a March 7th rally held by an evangelical church, warn that infections will surge in the weeks ahead, potentially reaching a peak in about a month. A variety of factors – including a high prevalence of diseases such as diabetes, scarcity of running water, and homes with several generations living under the same roof – has enabled the virus to spread with exceptional speed, according to epidemiologists.

While the Navajo Nation may not technically be at war with the virus, it does not feel at peace either. The Arizona national guard this month began airlifting protective masks, gowns and other equipment, using Blackhawk helicopters to deliver it to Kayenta, a town of 5,200 people near the sandstone buttes of Monument Valley.

Guard members also converted a community centre in Chinle into a 50-bed field hospital for quarantining people who have tested positive for the virus. The guard set up a similar tent hospital in Tuba City, near the Navajo nation’s western edge.

Going further, Navajo authorities said the entire nation would be under curfew for 57 continuous hours, from 8pm on Friday until 5am on Monday. The Easter holiday weekend offers the opportunity to practise extreme social distancing, the authorities said. Unlike many stay-at-home orders around the US, the Navajo curfews are being enforced with checkpoints and patrols. Violators can face jail time and hefty fines.

Fearing pushback, Navajo police chief Phillip Francisco said that anyone knowingly exposing officers to coronavirus would be charged with battery against a police officer. The Navajo Nation’s president, Jonathan Nez, who has begun wearing a mask in public, said authorities were working under the assumption that the reservation’s peak in cases could be about a month away.

Nez said that he was growing exasperated with delays in receiving federal emergency funds and requirements that tribal nations, unlike cities and counties, apply for grants to receive money from federal stimulus legislation. The extra hurdles have produced weeks of bureaucratic delays, he said.

“We’re barely getting bits and pieces,” Nez said. “You have counties, municipalities, already taking advantage of these funds, and tribes are over here writing our applications and turning it in and waiting weeks to get what we need.”

The crisis among the Diné, as many Navajos prefer to call themselves, is echoing throughout Native American communities. Around the US, and especially in New Mexico, tribal leaders have started barring nonresidents from reservations. In South Dakota, the Oglala Sioux tribe announced a 72-hour lockdown after a member of the Pine Ridge reservation tested positive for the coronavirus. The Blackfeet and the Northern Cheyenne tribal nations in Montana have announced curfews.

The Hopi reservation, which is surrounded entirely by the Navajo nation and includes some of the oldest continuously inhabited places in the US, issued its own stay-at-home order. Signaling vulnerabilities elsewhere, large clusters of cases emerged this week in San Felipe Pueblo and Zia Pueblo, two of New Mexico’s 23 federally recognised tribal nations.

Infectious disease specialists say the virus is thought to have arrived on the reservation later than in other parts of the US. It began spreading rapidly after it was detected among members of the Church of the Nazarene, an evangelical congregation in the outpost of Chilchinbeto near the Arizona-Utah border.

Families travelled from far-flung parts of the Navajo nation to attend the rally, which included a prayer service in response to the pandemic already spreading in parts of the country. Dr Laura Hammitt, director of the infectious disease prevention programme at the Johns Hopkins Center for American Indian Health, listed several factors that have made citizens of the Navajo Nation especially vulnerable to coronavirus.

The scarcity of running water on the reservation, she said, makes it harder to wash hands. There are also pre-existing health conditions, including respiratory problems caused by indoor pollution because of the wood and coal used to heat many Navajo homes.

Exceptionally close-knit families, which have helped the Navajos endure extreme hardships including a disastrous attempt by the US to forcibly relocate the tribe to eastern New Mexico in the 1860s, may also now heighten exposure to the virus.

“Instead of urban crowding in high-density cities like New York, you have indoor crowding with several generations living under the same roof,” she said. That explains the special need for field hospitals where patients who have tested positive for the virus can recuperate away from their families. Officials are also searching for ways to mitigate the spread of the virus in the so-called border towns where many Diné live.

For instance, in addition to the field hospitals assembled by the Arizona national guard, the iconic El Rancho Hotel in the town of Gallup, New Mexico, near the Navajo nation is planning to house homeless people who have developed respiratory problems in one of its buildings.

Despite such measures, fear is building on parts of the reservation, and some are taking it upon themselves to protect their families. In a culture prizing communal contact, Julian Parrish, a computer science high school teacher in Chinle, said he and his girlfriend had taken the unusual step of going on Facebook to request that visitors refrain from coming to their home unannounced.

Parrish (34) explained that he is prediabetic, his girlfriend is pregnant and her son has asthma that sometimes requires trips to the emergency room. “We don’t want to go anywhere near the hospital at this time,” Parrish said. “No one knows where the hell this virus is going next.” – New York Times