Democrat Nancy Pelosi is elected as speaker of the US House of Representatives for a second time. Video: Reuters 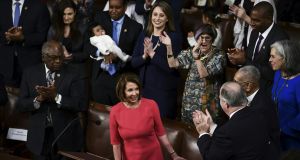 Nancy Pelosi in the US House of Representatives on Thursday shortly before her election as speaker. Photograph: Brendan Smialowski/AFP/Getty Images

On a day of pomp and pageantry, ebullient Democrats assumed control of the US House of Representatives on Thursday and elected Nancy Pelosi to be speaker, returning her to a historic distinction as the first woman to hold the post at the pinnacle of power in Congress, second in line to the presidency.

The investiture of Ms Pelosi, whose talent for legislative manoeuvring is surpassed only by her skill at keeping her fractious party in line, placed her at the fulcrum of divided government opposite an increasingly combative President Donald Trump. With Mr Trump, his presidential campaign and his businesses all under federal and state investigations, her handling of him will likely define the 116th Congress.

Her election came on the 13th day of a partial government shutdown that has dramatised the shifting dynamics in Washington. Mr Trump’s insistence on a wall on the Mexican border has come to embody harsh immigration policies that will run headlong into newly energized Democratic opposition.

But on Thursday, if only for a few hours, the dark clouds of divisive politics parted long enough for a peaceful transition of power from Republicans to Democrats, as a majority lawmakers rose in turn from their seats on the House floor to utter Ms Pelosi’s name and formally award her the gavel she relinquished in 2011 after a Tea Party wave swept Republicans to power.

Scores of newly elected Democrats in the most racially, ethnically and gender-diverse class in history were on hand for the occasion, some of them clad in the traditional or religious garb of their communities - a Palestinian thobe, a Muslim hijab, a Pueblo dress. The new members provided the visual tableau of change in a chamber that has for centuries been overwhelmingly white and male.

“When our new members take the oath, our Congress will be refreshed, and our democracy will be strengthened by the optimism, idealism and patriotism of this transformative freshman class,” Ms Pelosi said in prepared remarks to be delivered from the House floor.

“Working together, we will redeem the promise of the American dream for every family, advancing progress for every community.”

New York congressman Hakeem Jeffries, the chairman of the House Democratic Caucus, nominated Ms Pelosi to be speaker, prompting a standing ovation from most of the Democratic side of the House and much of the spectators in the gallery. In a rousing speech, Mr Jeffries extolled Ms Pelosi as “a woman of faith, a loving wife, a mother of five, a grandmother of nine, a sophisticated strategist, a legendary legislator, a voice for the voiceless, a defender of the disenfranchised, a powerful, profound, prophetic, principled public servant.”

“House Democrats are down with NDP,” Mr Jeffries said, using Ms Pelosi’s initials, and referencing a song by Naughty By Nature, “O.P.P”.

She became the first person since Sam Rayburn of Texas, more than 60 years ago, to reclaim the position of House speaker.

Democrats wasted no time flexing their new power in the House of Representatives on Thursday as they manoeuvred to pass legislation backed by Ms Pelosi that would end the government shutdown while ignoring Mr Trump’s demand for $5 billion for a border wall.

The shutdown, which affects 800,000 employees, was triggered by Mr Trump’s demand last month for the money for a US-Mexico border wall as part of any legislation funding government agencies, a condition that is opposed by Democrats.

The two-part package pushed by the Democrats includes a bill to fund the department of homeland security at current levels through February 8th, providing $1.3 billion for border fencing and $300 million for other border security items, including technology and cameras.

The second part would fund the other federal agencies that are now unfunded, including the departments of agriculture, interior, transportation, commerce and justice, through September 30th, the end of the current fiscal year.

In an interview aired on Thursday on NBC’s Today show, Ms Pelosi remained firm on the issue of funding for the border wall. “No, no. Nothing for the wall.”

Mr Trump on Thursday accused Democrats of playing politics on the issue.

“The Shutdown is only because of the 2020 Presidential Election,” he wrote on Twitter. “The Democrats know they can’t win based on all of the achievements of ‘Trump’, so they are going all out on the desperately needed Wall and Border Security – and Presidential Harassment. For them, strictly politics!” – New York Times/Reuters

1 Irish tourists excluded from visiting Greece as country begins its tourism season
2 Quarantine will cease within fortnight, Ryanair CEO claims
3 Making sense of conflicting data around Covid-19 deaths
4 Nineteen-year-old killed as protests flare up after death of George Floyd
5 Testing of Covid-19 tracing app to begin but no date for launch
Real news has value SUBSCRIBE