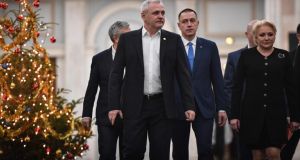 As the European Union braces for what is likely to be a tumultuous year, its presidency has passed to a country that is enduring turbulent times of its own.

During its first six-month term in the post, Romania is due to oversee Brexit, EU budget talks and European parliamentary elections, while trying to keep a lid on its own bitter political power struggles and widespread anger at the government.

Since taking power in 2017, Romania’s Social Democrats (PSD) have rowed back on anti-corruption reforms, sparking the country’s biggest street protests since its 1989 revolution and causing concern in Brussels and Washington.

A beneficiary of the softer legal regime could be Liviu Dragnea, the PSD leader who cannot hold office due to convictions for vote rigging and graft, but controls the government of premier Viorica Dancila from behind the scenes.

The move alarmed the EU, which still conducts special monitoring of Romania’s anti-corruption efforts 11 years after it joined the bloc.

The government’s rhetoric has done nothing to soothe Brussels, as Mr Dragnea and allies echoed the leaders of Poland and Hungary in dismissing EU criticism and suggesting liberal philanthropist George Soros was funding Romania’s protests.

Though the EU presidency-holder’s tasks are largely organisational, European Commission president Jean-Claude Juncker has voiced fears that Romania’s fiery domestic disputes and populist politics could be unwanted distractions, at a time when the bloc aims to show strength and unity over Brexit.

Mr Juncker told Germany’s Welt am Sonntag newspaper last weekend that he still had concerns for Romania, even though it was now “technically well-prepared” for the role.

“I think the government in Bucharest hasn’t yet fully understood what it means to take the chair over the EU countries. For judicious negotiations, you also need a readiness to listen to others and the firm will to put your own wishes aside. With that in mind, I have some doubts,” he said.

“A united front is needed at home in order to promote the unity of Europe during the presidency of the [EU] council,” he added.

In response, senior PSD member Mihai Fifor complained that “Romania is treated like a second-rate nation by some EU officials” and vowed that his country “will no longer take being scolded or sanctioned for things that happen everywhere in Europe”.

He also suggested that Mr Juncker was being misinformed by Angela Christea, the head of the European Commission office in Romania.

That drew a scathing response from commission spokeswoman Mina Andreeva, who said such “personal attacks” were “unacceptable”.

“We will not let our trusted ambassador become a target for attacks as part of domestic political disputes,” she added.

In a New Year message to the nation, Ms Dancila struck a conciliatory note.

“This is a national project that must unite us – state institutions, political forces and civil society, all Romanians wherever they may be,” she said of the presidency.

“I assure you that we are ready for a successful mandate, so that a dignified Romania rises and regains its rightful place and importance in Europe and the world.”

In his own New Year address, Mr Iohannis alluded to the government’s legal reforms and anti-EU rhetoric, by urging his country to build its future around “courage, civic involvement and strong attachment to the rule of law”.

“Let’s capitalise on this opportunity and prove that Romania is seriously involved in consolidating the European project,” he added.

After describing Romania in November as being “in the 11th hour and totally unprepared” for the presidency, he recently said his country could handle the role.

Yet a lasting truce remains unlikely between Mr Iohannis and a government that he has called an “accident of Romanian democracy” that is “run by the criminal Dragnea through intermediaries”.

Mr Dragnea and his allies will also find it hard to hold fire against Mr Iohannis, who they have threatened to impeach and who is expected to run for re-election later this year.

“The political angle is going to be complicated, because in 2019 we will have presidential elections and already the nationalistic vibe is very present in all discourses of the ruling coalition,” said Laura Stefan of the Expert Forum think tank in Bucharest.

The feud between the government and Mr Iohannis was “already an embarrassment and may rise up to the European level. The two sides aren’t talking to each other and I don’t expect it to get better,” she added.

“In this situation my best hope is that the EU presidency will sit on the shoulders of bureaucrats, without much hope that Romania is going to be a driving force in any topics . . . If it’s left to the bureaucrats then I think we’ll do a decent job.”