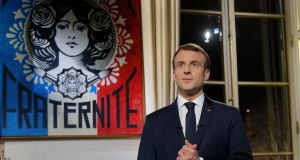 French president Emmanuel Macron has called on the nation to unite and cease “hateful” attacks during protests.

The president, went on the offensive in his televised new year’s speech. The counterattack comes amid deteriorating approval ratings which have plummeted in 2018 as he failed to shake the label “president of the rich” and faced an unprecedented citizens’ protest movement

He deliberately did not name the gilets jaunes (yellow vests) movement that has been demonstrating against the government at road blocks and weekly city centre protests for six weeks. But he criticised what he called a minority who, he said, claimed to be the voice of the people but were in fact “megaphones of a hateful crowd who have lashed out at elected politicians, security forces, journalists, Jews, foreigners, homosexuals”.

Macron said this hatefulness was “the negation of France” and that “our future depends on our capacity to love each other and to love our nation”. He said he had “seen the unthinkable and heard the unacceptable” in recent weeks and that “order” in France would be maintained.

Mr Macron spoke as more than 147,000 security forces were mobilised across the country for New Year’s Eve celebrations, not just because of the terrorist threat in France but also because authorities feared surprise demonstrations by anti-government protesters.

About 300,000 tourists and revellers were expected on the Champs Elysees on New Year’s Eve for Paris’s annual light show, which is projected on to the Arc de Triomphe and was the target of protesters this month. A security cordon was set up around the area from 4pm and guards and police checked those who entered. Some gilets jaunes demonstrators called for peaceful protests in Paris.

Over the past decade, hundreds of cars have been set alight on the edge of French cities including Strasbourg and Lyon on New Year’s Eve in what has become a kind of end-of-year ritual. But officials said security services were on alert for unannounced anti-government protests in order to prevent violence.

The gilets jaunes movement, named after protesters’ hi-vis vests, began in November as a tax revolt against a new fuel duty. It has morphed into a nationwide protest against what has been seen as an unfair and unjust tax policy, and Mr Macron’s measures favouring businesses and the wealthy. Rioting, arson and running battles with police have occurred on the edge of demonstrations in Paris and other cities.

In his new year speech, Mr Macron acknowledged the anger that had spread across France and tried to empathise. But he said it had been brewing for a long time – implying he did not accept the blame but instead laid responsibility on decades of mass unemployment and what he has called years of political stagnation.

Mr Macron tried to channel the positivity of the anger, saying it “showed us that we’re not resigned to anything, that our country wants to build a better future”.

He was careful to use the words “us” and “we” to avoid appearing cut off from the public mood. After he was mocked for the staid style of a recent televised speech aimed at calming the protests, which was delivered seated at a desk in a gilded room, this time Mr Macron stood up in a more modern room in the Elysee Palace.

After some in Mr Macron’s shrinking supporter base feared he would step back from his manifesto promise of structural reforms because of the unrest, the president went on the offensive, vowing to press on with his plans to overhaul the social welfare state and social protection in 2019, beginning with changes to unemployment benefits.

He said of his changes so far, including loosening of labour laws: “The results can’t be immediate, and impatience – which I share – can’t justify any kind of giving up.”

He repeated his argument that unbridled, lawless “ultra free-market” capitalism was at its end, suggesting he wanted to reinvent a new form of responsible globalisation in a Europe that “protects”.

Mr Macron said one of his key wishes for 2019 was “truth”, including a fight against inaccurate information online. This suggested that he might seek to go further on regulating information online, after his government passed a law which aims to empower judges to order the immediate removal of news deemed as fake during election campaigns. He did not give details.

Gilets jaunes demonstrators have called for referendums and a greater role for citizens in everyday politics. Mr Macron said “our institutions must continue to evolve” but didn’t spell out any possible changes to the political system. He has promised to launch a national debate from January and said only that he would write to citizens to set out the parameters in coming days.

The European elections in May will be a major test for Mr Macron’s political party, La Republique En Marche, which is behind Marine Le Pen’s far-right National Rally in the polls. Mr Macron said in his speech that he would soon set out a project for Europe.

He is also again under pressure over the scandal of his former bodyguard and security aide, Alexandre Benalla, who was sacked this summer after he was filmed acting violently to demonstrators.

The Benalla affair was back in the headlines this week over the former aide’s continuing use of diplomatic passports. He also claimed he had remained in personal contact with Mr Macron. The affair has proved damaging in part because of the Elysee’s botched handling of it, making statements that were contradicted and giving the impression of a cover-up. The Elysee on Monday dismissed his claims as invented. – Guardian