A Monet painting has sold at auction for €98m, setting a record for an Impressionist work. Sotheby’s did not identify the painting’s buyer, who beat five other bidders in an eight-minute auction. Video: Reuters 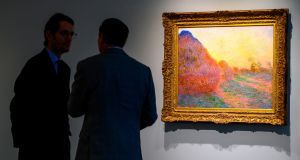 One of the few paintings in Claude Monet’s celebrated Haystacks series that still remains in private hands sold at auction on Tuesday for $110.7 million (€98 million), setting a record for an Impressionist work.

The oil on canvas, titled Meules and completed in 1890, is the first piece of Impressionist art to command more than $100 million at auction, said Sotheby’s, which handled the sale in New York City.

That also represents the highest sum ever paid at auction for a painting by Monet, the founder of French Impressionism and a master of plein air landscapes who died in 1926, aged 86.

Meules was one of 25 paintings in a series depicting stacks of harvested wheat belonging to Monet’s neighbour in Giverny, France.

The works are widely acclaimed for capturing the play of light on his subject and for their influence on the Impressionist movement.

Most works in the series have long been displayed in top world museums, from the Getty Center in Los Angeles to the Musee D’Orsay in Paris and the Metropolitan Museum of Art in New York.

Meules is one of only four to have come up for auction this century.

Sotheby’s said the painting was acquired by wealthy Chicago socialites directly from Monet’s dealer in the 1890s and remained in the family until it was bought at auction in 1986 by the present sellers for $2.53 million.

The auction house did not identify the painting’s buyer, who beat five other bidders in an eight-minute auction in New York City. –Reuters