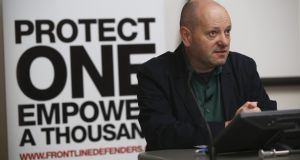 Five activists have been prevented from travelling to Dublin by their respective governments for a conference on human rights.

The Dublin Platform for Human Rights Defenders at Risk, which got underway on Tuesday and which runs until Thursday, is organised by Frontline Defenders.

More than 120 human rights activists from about 80 countries are in attendance to call for greater protection and support.

They are Khadija Ismayilova from Azerbaijan; Oyub Titiev from Russia; Said Boudour from Algeria; Michel Matos from Cuba; and Marivic Danyan from the Philippines.

“Human rights defenders are guaranteed the right to do their work without harassment or intimidation,” said Mr Anderson. “In these five cases, governments are afraid of the words these human rights defenders will deliver to their peers - that is the message of this cowardly effort to silence them.”

The opening ceremony featured a testimony by Bahraini woman Ebtisam Alsaegh who has been prevented from travelling for several years.

Speaking in Dublin, she called for an immediate end to gendered and sexualised attacks against women human rights defenders around the world.

On Thursday evening, the activists will march to Christchurch Cathedral as part of the “set them free” campaign, calling for the release of activists facing multi-decade prison sentences around the world.

The campaign includes former Front Line Defenders protection coordinator for the Middle East and North Africa, Abdulhadi Al-Khawaja, who is now serving a life sentence in Bahrain for his role in the peaceful pro-democracy uprising of 2011.