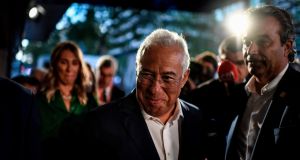 Portugal appears to be heading towards a modified version of its leftist governing partnership after the Socialist Party’s victory in Sunday’s general election.

With 37 per cent of the vote, this was the first time Socialist prime minister António Costa has won a general election. He had taken 106 seats in the 230-seat chamber with 99 per cent of results in, a substantial improvement on his performance in 2015 and a clear endorsement by voters of his four years in office. However, he is still 10 seats short of a parliamentary majority.

“The Portuguese want a new Socialist government to lead them with stability on the horizon for the coming legislature,” he said after his party’s win had become clear.

In second place was the centre-right Social Democratic Party (PSD) with 77 seats. To the Socialists’ left, the Left Bloc maintained its 19 seats, while the Communists lost ground with 12 seats.

Both those parties have lent their support to Mr Costa since 2015 as part of the so-called geringonça (“contraption”) partnership, which many doubted would last. However, the three-way leftist government defied expectations by stabilising the economy while reversing much of the painful austerity introduced following the country’s 2011 EU bailout.

The opposition was unable to capitalise on a scandal that rocked Mr Costa’s administration on the campaign trail when his former defence minister Azeredo Lopes was named as a suspect in an investigation into the cover-up of a 2017 theft of weapons from an army depot.

With the centre-right People’s Party (CDS) slumping to five seats, this election consolidated the left’s control of parliament.

In an editorial Jornal de Notícias newspaper said that “António Costa has a choice to make, an easier one than that which he made in 2015, and one requiring a political nous that he does not lack”.

That choice is between seeking another stable partnership with a party or parties to the left, and governing alone and seeking parliamentary support on a short-term basis.

Mr Costa’s statement that the result showed that “the Portuguese like the geringonça and want the current political solution to continue” hinted at a preference for the former.

Catarina Martins, leader of the Left Bloc, has expressed a willingness to work with the Socialists in either scenario. However, both her party and the Communists have warned that they would demand sweeping measures in exchange for their support, including public spending and wage increases and reforms to boost workers’ rights.

While the Socialists strengthened their position this election saw an increase in parliamentary fragmentation as smaller parties made gains. The environmentalist People, Animals and Nature party (PAN) followed a strong performance in May’s EU elections by securing four seats.

The far-right Chega defied Portugal’s traditional tendency to marginalise extremist parties by taking one seat in parliament. The eco-socialists of Livre and the Liberal Initiative also took a seat each.

1 Parents jailed over female genital mutilation of daughter
2 Gardaí may have to wait days to interview mother of McGinley children
3 Border on Brexit: ‘Europe will look after Northern Ireland’s interests’
4 The notorious Donald John Trump goes on trial
5 No obvious signs of injury on remains of McGinley children
Real news has value SUBSCRIBE