Johnson warns against ‘taking too many liberties’ with Covid-19 guidance

Fears over crowded beaches on south coast, violence in London after police tried to break up street parties 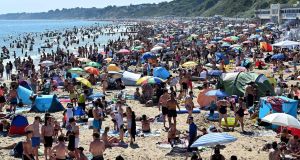 Bournemouth beach in southern England. A Dorset MP says half a million people visited the county on Thursday, when a local council declared a ‘major incident’ in Bournemouth. Photograph: Glyn Kirk/AFP via Getty Images

UK prime minister Boris Johnson has warned against “taking too many liberties with the guidance” on coronavirus following scenes of crowded beaches on England’s south coast and two nights of violence in London after police tried to break up big street parties.

A Dorset MP estimated that half a million people visited the county on Thursday, when a local council declared a “major incident” in Bournemouth when beaches were crowded.

“Let me be very clear about the scenes in Bournemouth – it’s very important for people to understand if you look at what’s happening elsewhere in the world where people have been coming out of lockdown,” the British prime minister said.

“I’m afraid what you’re also seeing is people taking too many liberties with the guidance, mingling too much, not observing social distancing. In some parts of the world – I won’t name them – you’ve got really serious spikes in the instances of the diseases.

“It’s crucial people understand that on July 4th we get this right and we do this in a balanced way and we recognise the risks,” he added.

Mr Johnson this week announced a major easing of the lockdown from July 4th, when bars and restaurants will reopen and the two-metre social distancing limit will be reduced to one metre. But Labour leader Keir Starmer said the prime minister needed to “up his game” on communications as the restrictions started to loosen.

“I’m really worried about the scenes we’ve seen from some of our beaches with overcrowding. This dates back to Dominic Cummings and that affair, where essentially the government had a message that the public read as one rule for them, another for us,” Mr Starmer said.

“For our officers who are simply doing their duty to be attacked is utterly unacceptable. These events are unlawful. They shouldn’t be happening and we have a duty to go and close them down and to disperse them. The local communities hate them, incredibly anti-social behaviour, very noisy during a pandemic and sometimes violence,” Dame Cressida said.

Home secretary Priti Patel, who has promised to double the maximum sentence for attacks on police and other emergency workers, said that those involved in clashes with police would face consequences. But the police federation, which represents police officers, warned that the easing of lockdown next Saturday had created almost “a countdown to carnival” that could see major social unrest.

A further 186 deaths from coronavirus were reported in Britain on Friday, bringing the total to 43,414, and there were 1,004 positive tests conducted in the previous 24 hours.

1 World, look away now – these are dark days for the United States
2 Michelle O’Neill will not step aside ‘under any circumstances’ despite calls from other parties after Storey funeral
3 Health officials ‘very concerned’ about foreign travel, says Donnelly
4 Sentence for attempted murder by teen in Dun Laoghaire too lenient, court finds
5 Bobby Storey: The IRA's planner and enforcer who stayed in the shadows
Real news has value SUBSCRIBE