Trump flounders in interview over Covid-19 cases and deaths

US president Donald Trump visibly floundered in a recent HBO interview in which he claimed the US has a lower number of deaths as a proportion of cases than “the world” and Europe. Video: HBO 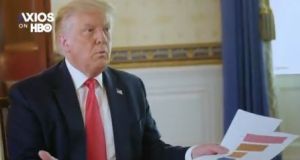 Screenshot of US president Donald Trump during his interview with Axios correspondent Jonathan Swan. Image: Axios/Twitter

US president Donald Trump visibly floundered in an interview broadcast on Monday when pressed on a range of issues, including the number of coronavirus cases and deaths in the US.

In the interview, broadcast on HBO and conducted by Axios’s national political correspondent, Jonathan Swan, Mr Trump again asserted that his administration is doing an “incredible job” responding to coronavirus.

Claiming that the pandemic was unique, Mr Trump said: “This has never happened before. 1917, but it was totally different, it was a flu in that case. If you watch the fake news on television, they don’t even talk about it, but there are 188 other countries right now that are suffering. Some, proportionately, far greater than we are.”

Swan pressed the president on which countries were doing worse. Mr Trump brandished several pieces of paper with graphs and charts on them that he referred to as he attempted to suggest the US figures compared well internationally.

According to figures from the Johns Hopkins University, the US has had over 4.7 million confirmed Covid-19 cases, with 155,471 deaths. The US accounts for more than one-quarter of all global confirmed infections.

Swan: “Why can’t I do that?” pic.twitter.com/MStySfkV39

In another section of the interview, Mr Trump repeats his false assertion that the reason the US has a significantly higher number of cases is because it tests more than anyone else, saying: “You know, there are those that say you can test too much. You do know that?”

Mr Trump also appears, without evidence, to assert that children are receiving positive Covid-19 test results for having a runny nose – which is not generally listed among the symptoms of coronavirus, which are a high temperature and a new continuous cough.

“You test, some kid has even just a little runny nose, it’s a case. And then you report many cases,” Mr Trump says.

The president attempts to shift blame for the outbreaks of coronavirus on to state governors, saying: “We have done a great job. We’ve got the governors everything they needed. They didn’t do their job – many of them didn’t, some of them did.”

Mr Trump was also asked about his previous baseless assertion that due to mail-in voting, the forthcoming US election would be “the most inaccurate and fraudulent election in history”.

In the interview, Mr Trump says: “So we have a new phenomena, it’s called mail-in voting.” Swan then clarifies that mail-in voting has existed since the US civil war.

The interview took place last Tuesday, before the president’s tweet that falsely floated the idea that November’s election could be delayed.

The US president also repeatedly cast doubt on the cause of death of Jeffrey Epstein, and said of Ghislaine Maxwell, the British socialite who has pleaded not guilty to allegedly participating in the sex-trafficking of girls by Epstein, that he wished her well.

Of Ms Maxwell, Mr Trump says: “Her friend or boyfriend Epstein was either killed or committed suicide in jail. She’s now in jail. Yeah, I wish her well.” Mr Trump goes on twice more to say of Epstein: “Was it suicide or was he killed?”

In another part of the interview, he dismissed again as “fake news” intelligence reports that Russia had been offering bounties to the Taliban for attacks on US forces in Afghanistan. Asked specifically by Swan whether he had ever discussed the issue with Russian president Vladimir Putin, Mr Trump confirms he has never mentioned it to him.

When Swan asks Mr Trump about Russia supplying weapons to the Taliban, the president asserts: “I have heard that, but it has never reached my desk.” – Guardian