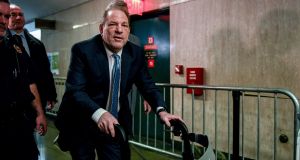 Former Hollywood film producer Harvey Weinstein has been convicted of sexual assault and rape by a New York jury.

Once one of Hollywood’s most powerful producers, Weinstein (67) was convicted on Monday of sexually assaulting former production assistant Mimi Haleyi in 2006 and raping Jessica Mann, then an aspiring actress, in 2013.

Justice James Burke ordered Weinstein to be held in custody and he was put in handcuffs by officers in court.

He faces up to 25 years in prison and is to be sentenced on March 11th. His lawyers requested that he be kept in a prison infirmary while awaiting sentencing.

The jury acquitted Weinstein on two counts of predatory sexual assault, which carried a potential life sentence, and the first degree rape of Mann.

In the minutes after the verdict was read in court, Weinstein was seen talking to his lead lawyer Donna Rotunno. He appeared expressionless.

Weinstein made his mark in Hollywood with critically acclaimed films such as The English Patient and Shakespeare in Love.

The verdict will be seen as a victory for the #MeToo movement that inspired women to go public with misconduct allegations against powerful men.

More than 80 women had accused Weinstein of sexual misconduct stretching back decades. He had denied the allegations and said any sexual encounters were consensual.

Actor Rose McGowan, one of the first to accuse Weinstein of abusing his position, said the producer would now finally know how it feels to have “power wrapped around his neck”.

“Every one of us who has come froward, we have a name, we have a history, we have a life, we are more than Weinstein. But today, because of the brave women, who bared their deepest hurt for the world to see, he’s in Rikers Island.”

During his trial, Weinstein often appeared feeble, entering the courthouse using a walker. He sometimes leaned on Ms Rotunno for support. He often appeared impassive, though at times he looked intently at his attorneys when they cross-examined his accusers.

Prosecutors portrayed Weinstein as a serial predator who had manipulated women with promises to open doors in Hollywood, coaxing them to hotel rooms or private apartments and then overpowering and violently attacking them.

“The man seated right there was not just a titan in Hollywood, he was a rapist,” Manhattan Assistant District Attorney Meghan Hast said during opening arguments.

During the many weeks of trial, the prosecution methodically elicited graphic testimony from several accusers, including Haleyi, who said Weinstein invited her to his SoHo home after she had worked on one of his television productions.

After she arrived, Weinstein backed her into a bedroom, held her down on the bed and forced himself on her orally, yanking out her tampon, Haleyi told jurors.

A onetime aspiring actress, Mann said that soon after meeting Weinstein she entered into an “extremely degrading” relationship with him that never included intercourse until, she alleged, he raped her in 2013.

She described Weinstein as a “Jekyll and Hyde” character: He was charming in public but often showed terrifying anger when they were alone, Mann said. At one point, she started sobbing uncontrollably on the stand, prompting the judge to end testimony early for the day.

Weinstein was charged with assaulting Haleyi and Mann, but prosecutors bolstered their case by calling several other accusers as witnesses. One of these women, Sopranos actress Annabella Sciorra, told jurors Weinstein came into her apartment one winter night in 1993 or 1994 and raped her.

Though the accusation was too old to be charged as a separate crime, prosecutors offered it to show Weinstein was a repeat sexual offender.

Three other women - costume designer Dawn Dunning, model Tarale Wulff and actress Lauren Young - testified that they were enticed into meeting Weinstein for professional reasons and then groped or raped.

Testimony of “prior bad acts” is generally not allowed in criminal trials, but an exception to the law allowed prosecutors to call these women to show Weinstein had a particular intention or a signature pattern of behavior. - Agencies