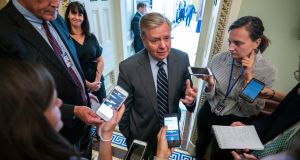 Republican senator Lindsey Graham argued that there was no proof of a “quid pro quo” between the president and Ukraine, and hence no wrongdoing by the president. Photograph: Jim Lo Scalzo/EPA

Key Republicans lambasted Democratic efforts to impeach President Donald Trump on Wednesday, as the acting director of national intelligence prepared to testify to Congress on Thursday.

Joseph Maguire, who replaced Dan Coats last month and has found himself in the deepening crisis that threatens to bring down Mr Trump, will testify on Thursday about a complaint he received by an anonymous whistleblower about the contents of a phone call on July 25th between the US and Ukrainian presidents.

The Washington Post reported on Wednesday that Mr Maguire threatened to resign if the White House prevented him from testifying to Congress on the contents of the complaint, which were passed to him by the inspector general of the intelligence services, though Mr Maguire later denied the report.

He had previously refused to furnish Congress with the information. But ahead of his appearance on Thursday, he passed on copies of the whistleblower complaint to the House and Senate intelligence committees.

Mr Maguire’s appearance is likely to provide further insight into the controversy which has erupted in recent days and prompted Democrats to open an impeachment inquiry into Mr Trump.

The White House released an account of Mr Trump’s July 25th phone call with Ukrainian president Volodymyr Zelenskiy on Wednesday which confirms that the US president asked his Ukrainian counterpart to investigate former vice-president Joe Biden and his son Hunter.

Mr Zelenskiy also told Mr Trump during the phone call that he would appoint a new prosecutor who “will look into the situation, specifically to the company that you mentioned in this issue”.

Several senior Republicans spoke out to defend Mr Trump after the publication of the memo, accusing Democrats of a partisan attempt to unseat the US president.

Senator Lindsey Graham tweeted: “Wow. Impeachment over this? What a nothing (non-quid pro quo) burger. Democrats have lost their minds when it comes to President Trump.” Like many Republicans he echoed the message coming from the White House, arguing that there was no proof of a “quid pro quo” between the president and Ukraine, and hence no wrongdoing by the president.

Mr Trump himself, who spent the day in New York at the United Nations and held a meeting with Mr Zelenskiy, retweeted a series of tweets by congressional Republicans supporting him. This included a tweet by congressman Rick Allen which said that “Since the day President Trump was elected to office, Democrats have tried to find any opportunity to undermine his presidency.”

Senator Mitt Romney, one of the few congressional Republicans to have criticised Mr Trump in the past, said the contents of the memo was “deeply troubling” but stopped short of saying he supported impeachment.

‘Integrity of our elections’

But House speaker Nancy Pelosi vowed to press on with the impeachment inquiry, arguing that the memo “confirms that the president engaged in behaviour that undermines the integrity of our elections, the dignity of the office he holds and our national security.”

“I respect the responsibility of the president to engage with foreign leaders as part of his job. It is not part of his job to use taxpayer money to shake down other countries for the benefit of his campaign,” she said.

Senator Chris Murphy, a member of the foreign relations committee, described the transcript as “devastating” and Mr Trump’s activities as “an abuse of office”.

“Within moments of President Zelenskiy discussing the need for US security aid, Trump asks him to investigate his political opponents. Throughout the call, Trump tells the Ukrainian president to co-ordinate with his re-election campaign. These are demands that a president of the United States simply cannot make of a foreign leader, and the transcript further underscores the urgent need to get a full, complete accounting of Trump’s abuse of his office,” said Mr Murphy.