With a rigorous system, the chief of staff has imposed some manners on the White House 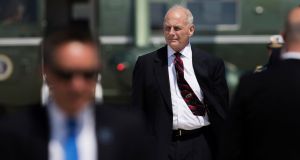 John Kelly, the White House chief of staff: he has made clear that one thing he will not seek to directly control is the behaviour of the president. Photograph: Tom Brenner/The New York Times

For months, the White House under President Donald Trump operated with few real rules, and those were barely enforced. People wandered into the Oval Office throughout the day. The president was given pieces of unvetted information, and found more on his own that he often tweeted out. Policy decisions were often based on whoever had last gotten Trump’s attention.

Trump’s Twitter habit shows little sign of abating. On holiday earlier at his private club in Bedminster, New Jersey, and now, ensconced again in the White House, he has been watching television – unfettered by any aides – and responding as he always has.

But inside the West Wing, the president’s new chief of staff, John Kelly, has been trying to control the things he can. After being sworn in on July 31st, he spent three weeks assessing how to create a less jumbled, chaotic churn around Trump, and how to create a system that the president’s staff will respect. In two memos sent to the staff on Monday he began to detail his plan, starting with how he wants information to get to the president, and how Trump will respond.

The pair of memos, signed by Robert Porter, the assistant to the president for policy co-ordination and staff secretary, as well as Kelly, codified rules and procedures that a White House typically sets at the outset of an administration. Kelly’s predecessor, Reince Priebus, sent some similar guidelines around early in the administration, according to two officials, but they were never taken seriously.

Kelly, a retired Marine general, has been treated with a different level of deference inside the building, those aides said. Staff members discovered early on that they could defy Priebus, the officials said, but crossing a Marine is a different matter.

Kelly has made clear that one thing he will not seek to directly control is the behaviour of the president, and there is a good reason for that.

Trump has a history of lashing out at advisers who have publicly conveyed their attempts to impose tighter procedures on him. Just before election day, for example, Trump blew up publicly after a New York Times report that his aides had succeeded in keeping him off Twitter for the final stages of the campaign. He tweeted several times to enforce the point.

Despite Kelly’s fairly deft touch at approaching the president, Trump has shown signs of rebelling after stories have appeared describing how his chief of staff has put tighter controls in place and is imposing some discipline on White House operations. That included his news conference at Trump Tower in which he doubled down on his blame for “both sides” in the racially charged violence in Charlottesville, Virginia, and his campaign rally speech in Arizona on Tuesday when he accused the news media of mischaracterising his statements.

Kelly had urged Trump to deliver a more sombre, traditional statement the day before. And he and other advisers had urged the president to avoid taking questions from the news media at Trump Tower, a request that the president ignored.

Before Trump’s rally in Arizona, aides prepared a sober set of remarks for him to deliver about unity, and sought to redirect his focus after he learned of a New York Times report about his relationship with Mitch McConnell, the Senate majority leader. Trump, who trusts few people and adjusts to new advisers gradually, railed at his new chief of staff over the story, according to one person close to the president.

Still, the memos have brought comfort to a number of Trump’s advisers who have sought structure in a Wild West environment. And they have provided guard rails where few existed. “Gen Kelly is instilling processes to ensure that the president has the information and analysis he needs to make decisions,” said Sarah Huckabee Sanders, the White House press secretary.

The memos were follow-ups to themes that Kelly touched on during a conference call with senior staff members in which he went through a menu of items related to how the president receives information, how he makes decisions, how meetings with him are scheduled, and how speeches are scheduled and written.

The effect so far has been, at times, a more pronounced split-screen between the president’s public behaviour and his staff’s more structured approach. But inside the West Wing, several aides said they felt more protected by an established process.

In one of the memos, White House aides were told that all materials prepared for the president must go first to Porter for vetting and clearance. Then Kelly must sign off on them before they go to Trump’s desk.

That includes news articles, according to West Wing officials who described the memos’ content of particular importance, given the propensity for some of Trump’s staff to slip him news accounts from dubious sources that shape his thinking or prompt him to cite unreliable or inaccurate information.

The process for documents with legal implications is somewhat more rigorous, although a version of it has been in place since Priebus was chief of staff. For instance, the draft of an executive order will go through several stages of development, involving the White House counsel’s office and vetting by relevant staff and agency officials. Then it will go to Kelly for final approval before it is given to the president.

In the second memo, Kelly and Porter set up a system for deciding policy issues that have a legal aspect, such as executive orders, to ensure that all sides of the issue are heard. Any decision made in a meeting will be formalised in a memo that has to go through Porter and then Kelly for final sign-off.

That process is expected to curtail freelancing and hijacking of decisions by West Wing aides. Bannon was often accused of taking advantage of the loose process, but Trump’s son-in-law, Jared Kushner, and his daughter, Ivanka Trump, who both work in the West Wing, have also frustrated their colleagues for months by going directly to the president on specific issues.

On Kelly’s first day on the job, he held a small meeting with top aides to the president after a fuller staff meeting. He told them that Oval Office access to Trump, which was once nearly universal to people coming through the West Wing, would be strictly limited to appointments only.

The exceptions, Kelly said, were the president’s wife and his 11-year-old son. And, he added, turning to Ivanka Trump, who was seated near him, the president’s eldest daughter, if she was speaking to him as a daughter and not a member of his staff. Kushner and Ivanka Trump quickly gave in to Kelly’s new system, two White House officials said.

Since Trump returned from a working holiday at his golf club in New Jersey, the newly renovated West Wing has taken on a more formal air. Not only is the door to the Oval Office closed, preventing passersby from catching the president’s eye, but a corridor door leading to the president’s office has also been kept closed.

Trump, who often complained about Priebus, appears to have absorbed the need for one person to run the staff. The changes Kelly has put in place have resulted in a more streamlined, functional government, administration officials said. But Trump, presidential experts say, has shown he is immune to efforts to bring lasting change to his own behaviour. And that could ultimately undermine Kelly’s mission.