US Politics: Sweeping plan can revive global migration at a hinge moment in history 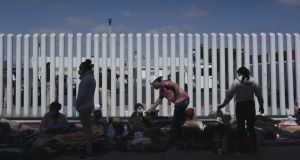 Migrants at the border in Tijuana, Mexico. Photograph: Eric Thayer/Bloomberg

Donald Trump attacked them in word and deed. The UK aimed to cut their numbers by leaving the EU. Yet immigrants might come to see the era before the coronavirus pandemic as an Eden of goodwill. A tightening of borders in some countries has become savage constriction in almost all. Economic stigma (the immigrant as job-thief) has hardened into something more lurid (the immigrant as disease-vector).

If it outlasts the pandemic, a world of ultra-low migration would be less humane, as well as less efficient. Remittances, vastly more important than foreign aid, would dry up. The World Bank already expects them to fall for a second straight year. Countries that export low-wage workers would have to employ them at home, or face who knows what consequences for their internal stability. Seen in the rich world as a source of civil strife, the movement of people often prevents it elsewhere. The world stands to lose a pressure valve as well as a material force for good.

Few things can avert a lasting chill on migration. Reform in the opposite direction by the world’s most powerful country is one of them. An immigration Bill put forward by US president Joe Biden is being hailed as the most sweeping change of its kind since 1986. This criminally undersells it. Whatever their content, previous reforms were of national or perhaps regional interest. This one, by dint of timing, could nudge the world into openness at a hinge moment in history.

As well as naturalising undocumented migrants, including those who arrived as children, the Bill would loosen the rules on skilled workers, students and the relatives of lawful permanent residents. Even in its tonal changes, the legislation is open-handed. That unlovely word “alien” is to become “noncitizen” in official discourse.

The ultimate proof of the Bill’s ambition is that it will not survive Congress in its present form. Nor necessarily should it. Republicans raise the moral hazard of naturalising the undocumented, however blameless. As the foreign-born share of the US population nears a record high, concerns about even its authorised growth are not innately mean-minded.

Half a loaf, then, is the most that will emerge from the legislative slicing. But even this would constitute an act of drastic openness by the international system’s anchor nation; and it comes at the worst moment for human mobility in a lifetime. As a moral example for other countries, it is striking enough. As a direct boost to global migration, it is potentially decisive.

In coldly numerical terms, an open US is tantamount to an open rich world. In 2015/16, 39 per cent of all migrants in OECD countries lived there. Germany, with just 10 per cent, was second. A new flow of skilled, US-bound workers would force other globalised economies – Britain, say, or Singapore – to decide if they can afford to let one nation hog them indefinitely. If there is to be a global labour market again, it will take the circularity of competition for finite talent. It also calls for a disproportionately big economy to kickstart that process.

As troubled as it is, globalisation has more obituarists than problems. Quietly, trade in goods returned to its pre-pandemic level as early as last November. A huge share of humanity is still, to be joined to the modern economy, many of them in India alone. Under Biden, even the US-China feud has a chance of stopping just short of conscious decoupling.

It is the cull in migration that most threatens the idea of one coherent world. What began as a transient measure could become settled will.

If it does, prudence will have run amok. Health-wise, a nation has less to lose from immigrants than from tourists, business travellers or even visiting expats. No one who comes to live is going to balk at a week or two of quarantine. Once settled, they have the same stake in public health as citizens by birth. Those of working age can also improve the ratio of taxpayers to retirees just as countries must foot the awesome bill for pandemic relief.

Just to name these varieties of cross-border traffic is to see which will be the hardest, politically, to revive. Having achieved through external shock the migrant levels they once tried to legislate for, nativists will not allow a big increase blithely. Without one, though, the world stands to forfeit economic growth as it leaves the pandemic behind.

If all Biden’s Bill achieves is to exempt the US from this folly, it is worthwhile. If it moves other nations to follow, he might never do anything grander. – Copyright The Financial Times Limited 2021